Home / Component / CPU / Haswell: what do you think?

Haswell: what do you think?

Intel's Haswell line of CPUs has been out for a while now, but unlike previous generations of Intel chips that blew away the competition (it's been a long time since AMD really nipped at Intel's heels) Haswell didn't make such a big splash. It wasn't because of its default performance though, but its overclocking potential. Early iterations struggled to hit the same performance extremes as Sandybridge and Ivybridge hardware, partly it seemed because of how hot it would run; especially when you upped the vcore to squeeze out a few extra cycles on the clock.

With rumours that a new refresh of the Haswell line isn't too far away (Q1 or Q2 this year) the question we're asking our readers today is, what do you think of Haswell? 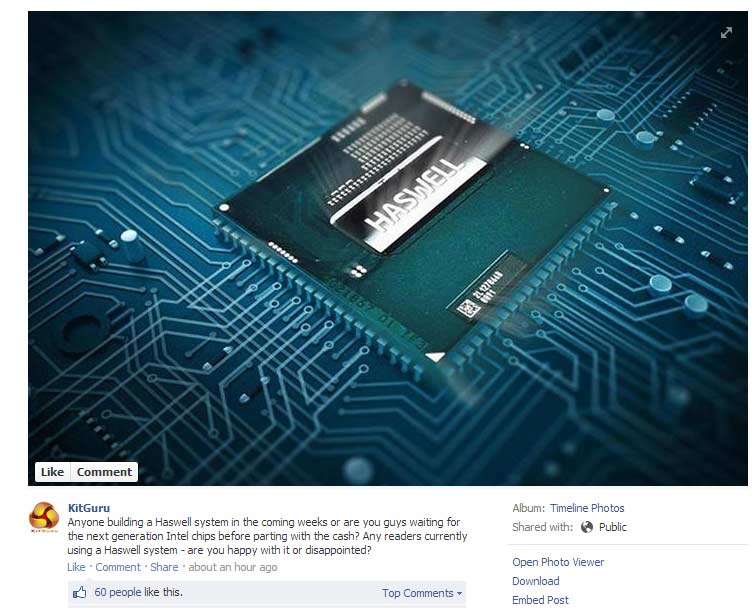 Click the image above to head to our Facebook page and tell us just what you think of Intel's current-gen chips.

We've got some great discussion going on over there, including resident Haswell overclocker, Eric Lin, who linked us through to his excellent spreadsheet of over 100 Haswell overclockers and their results. It seems you can hit very extreme clocks with the chips, but you'll need good cooling and a lot of patience. Don't expect to go into a Haswell OC lightly, there's more to do than up the Vcore and play with the multiplier.

There is some luck involved he says, but if you get it right, your Haswell has the chance to beat out Sandy and Ivy chips on a per-core performance basis, but make sure you have a way of dissipating that heat.

The question is, if you haven't hopped onto the Haswell bandwagon yet, do you plan to when it refreshes?

KitGuru Says: Do you agree with Eric? Or is he full of bunk? Let us know over at the KG Facebook page.