Last month, AMD began showing off its CPU roadmap for the year, confirming that the first Ryzen ‘Raven Ridge' APUs would be launching fairly soon. The Ryzen 5 2400G and Ryzen 3 2200G will be the first out, sporting Zen CPU architecture and Vega graphics. Now we have a good idea of what performance to expect, with new benchmark results leaking out. We also have the first benchmark result for Intel's upcoming laptop chip, which will feature a Radeon Vega GPU core.

The folks over at MoePC managed to get their hands on some 3DMark benchmark results for AMD's first Raven Ridge desktop APUs. Both the 2400G and 2200G use Vega 11 and Vega 8 respectively for graphics. In real world terms, the 2400G sits just above an Nvidia GT 1030 in 3DMark 11 and somewhat on par with a mobile RX 550. 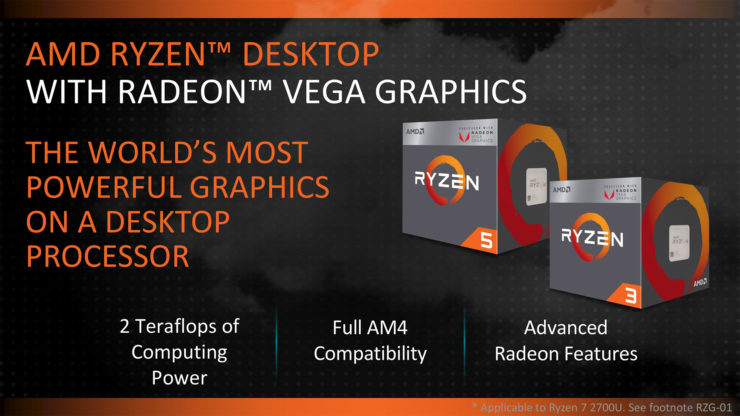 In 3DMark 11's performance test, the Ryzen 5 2400G scores 5042 points. In comparison, an RX 550 Mobile scores 5568. The Ryzen 3 2200G on the other hand scores 3950 points. Meanwhile, the RX Vega M GL, which AMD developed for Intel to use on some of its own upcoming processors, scores impressively ahead of these APUs.

According to the results, the RX Vega M GL can out-do a GTX 1050Ti (9694 points), scoring 9967 points in 3DMark 11. This means that Intel's upcoming laptop processors sporting custom Vega graphics will outperform these upcoming Ryzen APUs. Or at least, that is what these early benchmark leaks tell us.

KitGuru Says: You might not get much Triple A 1080p gaming done with these APUs based on the current results. However, for lighter ‘esports' games, they should probably do the trick. Are any of you currently planning a budget system build?