With AMD set to release its Zen architecture processors towards the end of this year, the company has begun giving out more details during its quarterly earnings call. This week, AMD reported its quarterly earnings and in that call, CEO Lisa Su revealed a few more details on the Zen architecture along with what we can expect and when to expect it.

Right now, AMD is in talks with PC makers to begin building systems using its codenamed Summit Ridge processors, which are based on the Zen architecture and may well be released under the ‘FX' brand during late 2016. These Summit Ridge CPUs will be the first high-performance desktop CPUs from AMD to use Zen, while chips for servers will appear in early 2017. Nothing was said about Zen APUs though we did hear some rumours recently– there is also no word on Zen for laptops just yet. 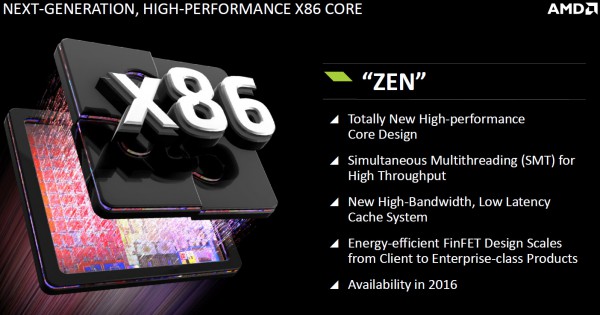 We already know that AMD has high hopes for Zen and according to a previous report, the chip has managed to meet internal expectations with no significant bottlenecks found. Right now, Lisa Su is saying that AMD's Summit Ridge CPUs will be a “re-entry” into the high-performance desktop market for the company.

Lisa Su also spoke about performance a bit, saying that AMD's Zen-based CPU offers 40 percent more performance per cycle than Excavator cores, which are currently found in AMD's Carrizo chips. We still have a pretty long wait but we do know that Socket AM4 mat be launching fairly early this year around March though only APUs will be taking advantage of it at first, with Zen to follow later in the year.

KitGuru Says: AMD is gearing up for a lot of launches in 2016, with the debut of Socket AM4, DDR4 support and the new Zen architecture. Are any of you looking forward to seeing how AMD's new CPUs perform?