Khronos Group on Tuesday introduced what was originally known as the next-generation OpenGL initiative, a brand-new application programming interface called Vulkan. The new API is designed to replace OpenGL in the long-term future and will address loads of markets and platform.

The Vulkan is a new low-overhead/high-throughput API that provides access to graphics and compute on modern graphics processing units used in various devices. Nowadays GPUs are used not only inside personal computers or even mobile devices, but inside servers, game consoles, VR headsets, cars, robots, drones, etc. All of these devices use different operating system and sport different GPU architectures, but Vulkan is designed to support all of them. 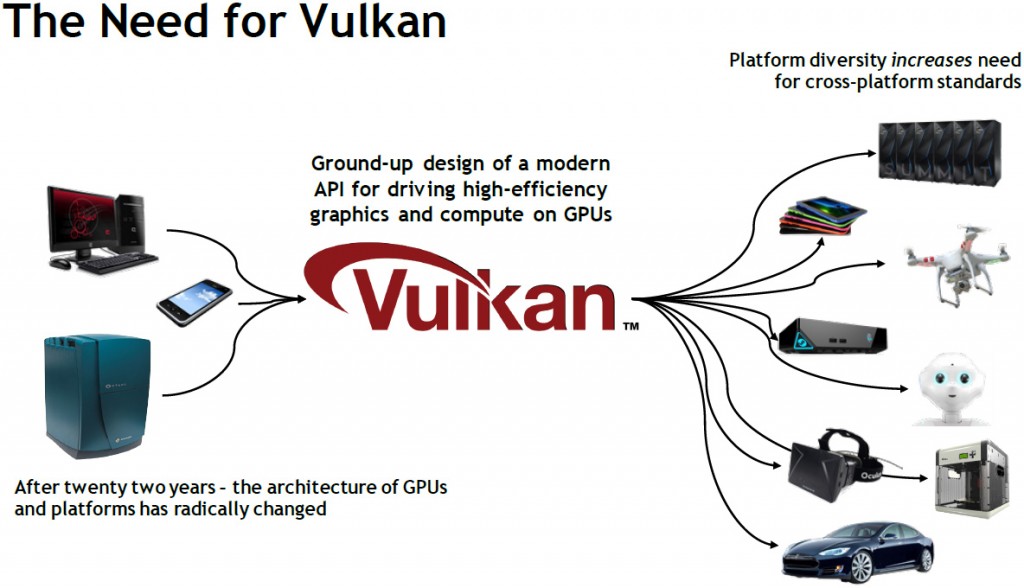 “Vulkan is a significant Khronos initiative to provide developers the choice of a state-of-the-art GPU API that is open and portable across multiple platforms, at a time where platform diversity is increasing,” said Neil Trevett, president of the Khronos Group and vice president at Nvidia.

Just like AMD Mantle and Microsoft DirectX 12, the new open-source Vulkan API will enable explicit GPU control demanded by advanced engines, middleware and applications, will minimize driver overhead and will enable efficient CPU multi-threading. The API itself will be vastly different from OpenGL and will therefore not require complex driver development, something that made usage of OpenGL much harder for many developers in the recent years. The new driver model will naturally improve driver reliability, which will help to popularize the new API in general.

The layered design of Vulkan allows multiple IHVs to plug into a common, extensible architecture for code validation, debugging and profiling during development without impacting production performance; this layering flexibility is expected to catalyze strong innovation in cross-vendor GPU tools, according to Khronos. 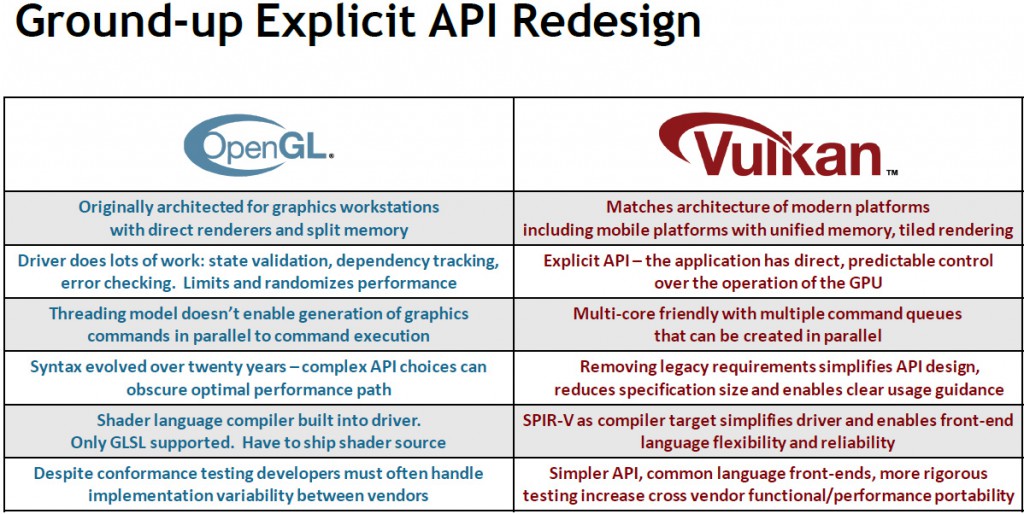 In addition, Khronos announced that Vulkan and OpenCL 2.1 will share core intermediate language technologies resulting in SPIR-V. Standard Portable Intermediate Representation (SPIR-V) splits the compiler chain, enabling high-level language front-ends to emit programs in a standardized intermediate form to be ingested by Vulkan or OpenCL drivers, which eliminates need for a built-in high-level language source compiler in the drivers and improves performance. 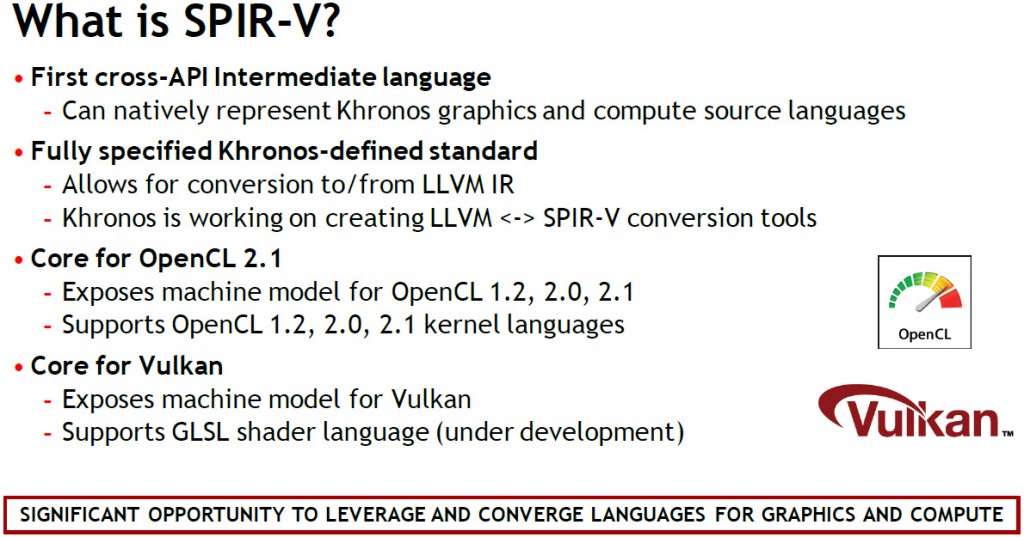 “Khronos will be driving the Vulkan ecosystem with open source conformance test components and sample front-end compiler implementations that use SPIR-V to leverage the hardware community’s investment in optimized back-end drivers. Vulkan expands the family of Khronos 3D APIs, and complements OpenGL and OpenGL ES that between them, provide access to billions of GPUs today, and will continue to be evolved and maintained to meet industry needs,” added Mr. Trevett. 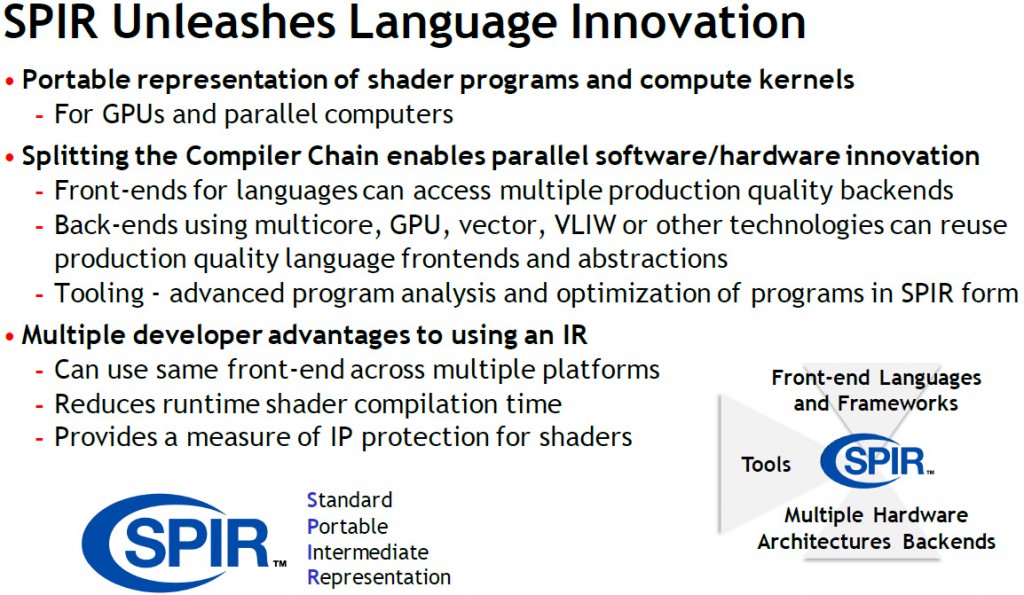 Vulkan and SPIR-V will be supported by virtually all important high-tech companies, including Apple, AMD, ARM, Imagination Technologies, Intel, Nvidia, Microsoft, Qualcomm, Samsung, Vivante and tens of others.

Initial specifications and implementation of Vulkan are expected this year. The new API will not replace OpenGL anytime soon, but will enable new opportunities for many app developers on existing platforms as well as will allow software makers to address markets of emerging devices. 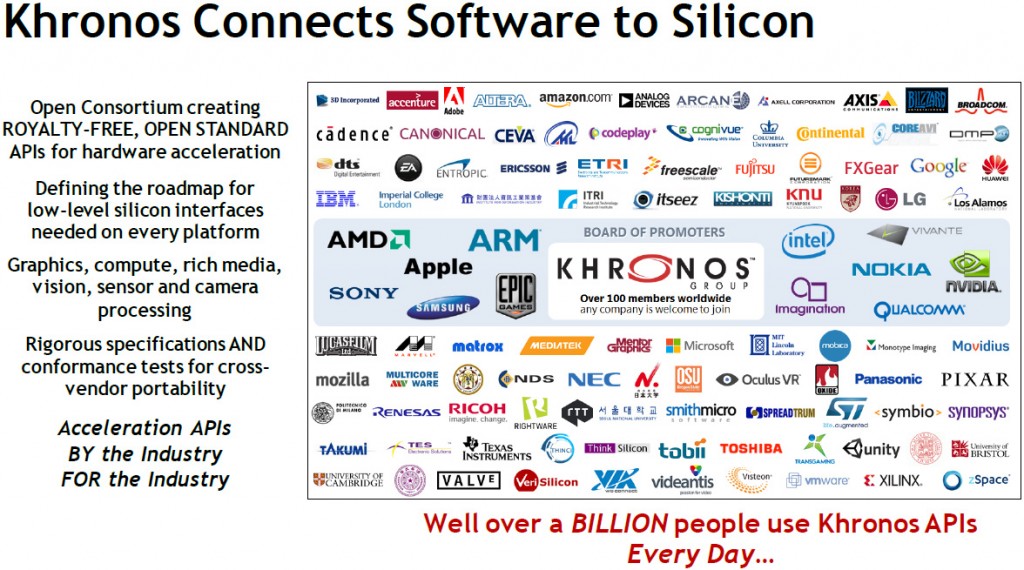 KitGuru Says: The announcement of Vulkan and SPIR-V has all chances to become the most significant announcement in the high-tech world in years. The amount of devices and platforms will grow exponentially in the coming years and Vulkan is designed to support all of them, which is simply incredible.