The Origin Chronos RVZ01 small form-factor gaming desktop is a compact system that can offer rather ultimate performance, yet, with a number of trade-offs. The Silverstone RVZ01 case is only compatible with the Silverstone SFX power supply units, which is why its maximum power consumption is limited to 600W. The GeForce GTX Titan Z graphics card can consume up to 375W of power itself and Nvidia recommends to use at least 700W PSUs with the dual-chip flagship graphics board. Therefore, if a customer chooses to install the dual-GPU GTX Titan Z, he or she should be careful with other components and keep in mind their power consumption.

The Chronos RVZ01 is based on a micro-ITX mainboard (Origin offers the Asus H97I-PLUS or the Z97I-PLUS as well as the EVGA Z97 Stinger), so do not expect a lot of expansion capabilities. Still, it is possible to put in up to four storage devices (3*2.5”, 1*3.5”), a slim slot-loading optical drive and so on. The boutique PC makers offers to install factory-overclocked Intel Core i7 “Haswell” microprocessors as well as Nvidia GeForce GTX graphics cards, including the Titan Z. 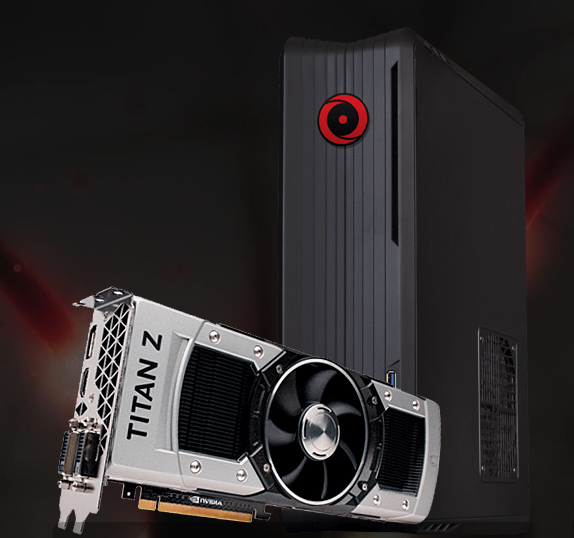 It is unclear whether the Origin Chronos RVZ01 system will remain stable once it is packed with pre-overclocked hardware, a lot of memory and numerous storage devices, but Origin is supposed to guarantee that. Obviously, such PC will be very noisy since there is not enough space to cool-down a graphics card with 375W thermal design power.

“So far, 4K gaming PCs have been required to be in large tower cases with multiple video cards,” said Kevin Wasielewski, Origin PC CEO and co-founder. “It's amazing to see that in such a short amount of time we are already offering a true 4K gaming PC in a micro tower that can sit vertically on your desk, or horizontally in your living room. The Chronos micro tower with a 12GB Nvidia Titan Z is the most gaming power I have ever seen in such a small chassis.”

It is noteworthy that the Silverstone RVZ01 case is compatible with graphics cards that are up to 13” long. Therefore, in theory, one could install AMD’s Radeon R9 295X2 graphics card inside, which is about 12” long.

KitGuru Says: Performance costs. Extreme performance costs even more. Extreme performance in a small form-factor costs an  extreme amount of money. Everything seems logical here. The only question is whether such PC will work without any issues for a long time (a thing for $6000+ is supposed to serve for long, isn't it?). The overclocked processor and graphics card will stress the PSU and will produce rather insane amounts of heat. Keeping the latter in mind, do not expect the Origin Chronos RVZ01 to be quiet…