After getting our first look at MSI's latest gaming laptops last night, the company also unveiled a host of new PC components and peripherals. Chief among these are the new RTX 30-series Sea Hawk GPUs, while we also saw new monitors, coolers and more.

Starting first with the Sea Hawk range, right now it's not clear which exact GPUs will get the Sea Hawk treatment aside from the RTX 3090 – but we'd say an RTX 3080 is also likely. These cards use a 240mm AIO in tandem with a single fan on the card itself, and MSI says this means ‘the combined advantages of both air and liquid cooling come together with dedicated fan cooling and an all-in-one closed-loop liquid cooling solution that is efficient, silent and requires absolutely no maintenance.'

MSI is working with Asetek for this cooler, with the OEM manufacturer stating the AIO is capable of dissipating up to 350 Watts. Asetek also added that the Sea Hawk cooler uses ‘a newly designed and unique cold plate' which has been optimised for 30-series GPUs via its new fin area, while the cooler also extends to the VRAM modules on the PCB. 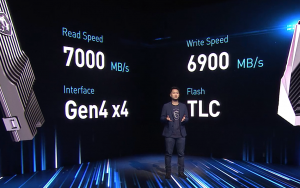 Elsewhere, MSI confirmed it will be bringing its first SSDs to the market. Right now details are fairly sparse, but we know these will be PCIe 4.0 drives, using TLC NAND flash with speeds up to 7000 MB/s read and 6900 MB/s write. MSI also stated a Mean Time Between Failure (MTBF) of 1.6 million hours. 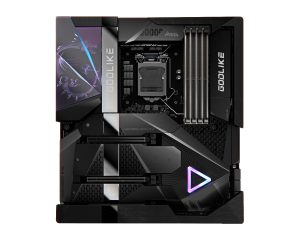 We also got a look at MSI's flagship Z590 board, the MEG Godlike. MSI announced thirty Intel 500-series boards earlier in the week, and claimed the Godlike motherboard is the definition of an ‘extreme gaming motherboard'. Not much is known about the spec yet, aside from an expected 18+1+1 power phase design.

MSI is continuing to manufacture liquid coolers, a relatively recent venture for the company, as the CoreLiquid K360 was also announced during the presentation. This 360mm AIO  uses Torx 4.0 fans to generate ‘supreme airflow', while a 60mm Torx 3.0 fan is placed within the pump/waterblock unit ‘providing concentrated cooling to power solutions'. The block is also home to a 2.4in LCD display which can display system information. We'd guess MSI is using Asetek as the OEM for this unit. 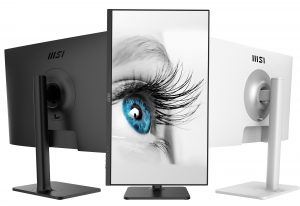 We also got a look at two new business-oriented monitors, forming part of MSI's MD series. The screens in question are the MD271 and MD241, utilising Type-C connectivity and a tool-free design ‘to effortlessly connect and charge, and assemble or disassemble for a VESA mounting environment'. MSI also emphasise the anti-flicker and low blue-light technologies, for which the screen is TUV certified. Panel specifics were not revealed at the time. 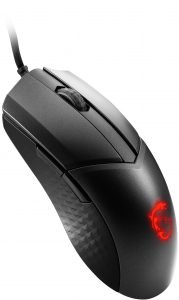 Lastly, MSI unveiled its latest gaming mouse, the Clutch GM41 Lightweight. Despite the name, we don't know how much the GM41 weighs, but it is an ambidextrous design with a 16000 DPI sensor, possibly PixArt's PMW 3389. It also uses MSI's ‘FriXionFree Cable', likely a paracord-style cable designed to minimise drag or kinking.

KitGuru says: What do you make of MSI latest hardware announcements? I'd be interested to see an RTX 3090 running on a 240mm AIO.