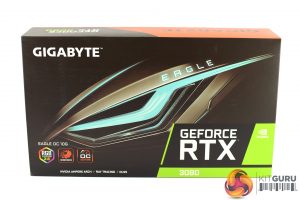 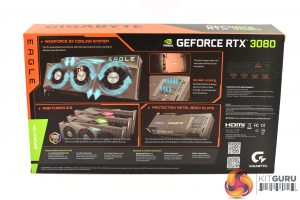 Despite the new Eagle series, this graphics card ships in a familiar-looking box, complete with Gigabyte’s signature orange accents, with some neon blue artwork also visible on the front.

On the back of the box, Gigabyte highlights a few key features of the card, including its fan design, the RGB lighting and metal backplate. 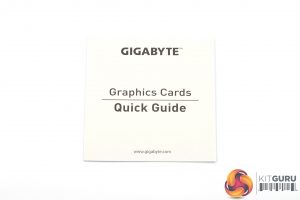 Gigabyte certainly hasn’t gone overboard on the included accessories, as we find a solitary quick start guide in the box. 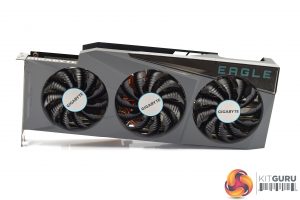 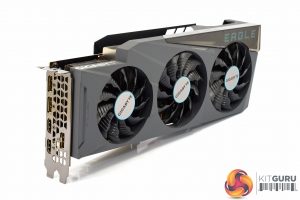 We’re all here for the card though, and it’s not a bad-looking piece of kit. I first noticed the unique shape of the shroud, as it almost forms an L-shape due to the way it extends over the sides of the PCB and heatsink. You will also notice a translucent plastic section above two of the fans, which is home to the Eagle brand name.

It’s certainly not a boring card to look at, but as it is almost entirely grey, it is still very colour neutral, so you shouldn’t have any issues installing this in a system with a specific colour scheme.

We can also note the triple-fan cooler. The fan closest to the I/O bracket is slightly smaller than the other two, measuring 80mm compared to the 90mm diameter of its neighbours. The central fan also spins in reverse, something we have seen on several Gigabyte cards now, and the company claims this reduces turbulence from airflow generated by the fans. 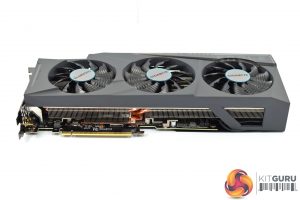 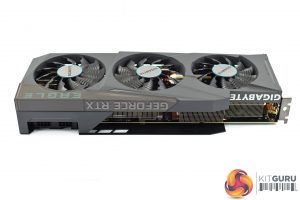 In terms of its dimensions, this is certainly not a small graphics card. Prospective RTX 3080 owners should become well acquainted with this trend, as board partners appear to have universally increased the size of their coolers and heatsinks to deal with the increased power, and therefore heat, demanded by the GA102 GPU.

In the case of the Eagle OC, we don’t have official dimensions from Gigabyte at the time of writing, but my measurements put the card at approximately 32cm x 13cm x 5.5cm. As ever, it’s worth double checking there is enough space inside your chassis. 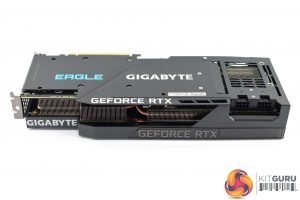 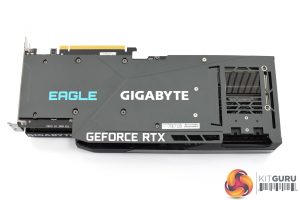 Getting a view from the side of the card, one thing I noticed is that there is a fair amount of branding printed on the card, in fairly large letters too. ‘Gigabyte’ is printed on both the front side and in the centre of the backplate, while ‘GeForce RTX’ is again on the front side and the edge of the backplate. ‘Eagle’ is the third brand name printed on the backplate, and as we pointed out above, it is also visible on the underside of the shroud, above the fans. It is safe to say you won’t be forgetting exactly who is the maker of this graphics card!

As for the backplate itself, this is a full-length metal plate that matches the grey plastic shroud. Aside from the branding, it is pretty plain, except for that large cut-out to the right-hand side of the card. This simply provides a more open and less restricted airflow path through the heatsink. 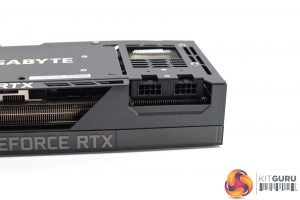 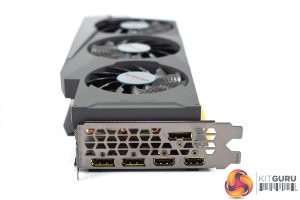 Like every custom RTX 3080 GPU, the Eagle OC does not use Nvidia’s new 12-pin power connector. Instead, two 8-pin plugs are what’s required.

For video outputs, we have three DisplayPort 1.4a connectors, and then two HDMI 2.1 ports. The latter is actually an extra HDMI 2.1 port compared to the Founders Edition, which could prove useful if you want to connect to more than one high-bandwidth display. 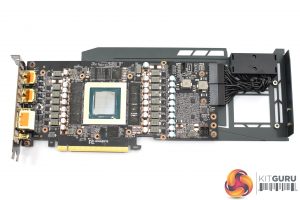 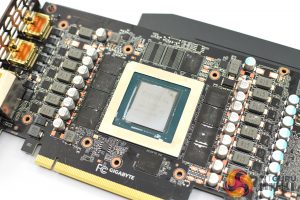 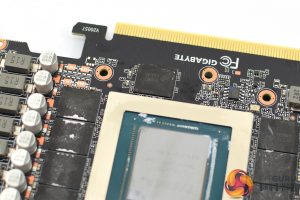 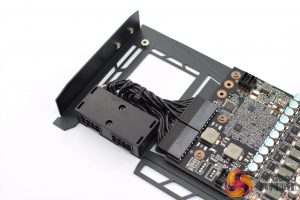 In terms of the PCB, Gigabyte appears to have gone for a slightly customised design here. This is most evident in its use of a 13+4 phase VRM, which has added an extra phase for the memory compared to reference. We can also see the company has deployed an extension for its 8-pin power connectors, so the connectors themselves are physically further down the length of the card than if they were directly attached to the PCB itself.

We also get a good look at Micron’s GDDR6X memory, with each chip bearing the D8BGW model code. These models are rated for a speed of 19Gbps. 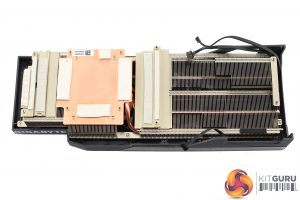 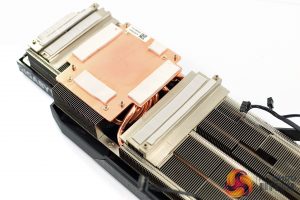 The cooler design for the Eagle is pretty straightforward. Gigabyte is using two fin stacks which are connected by a total of 7 composite copper heatpipes, each of which measure 6mm. The GPU contacts directly with a copper plate, as do the memory modules (via thermal pads). Smaller plates are also used to contact with the VRM and MOSFETs, again via thermal pads.