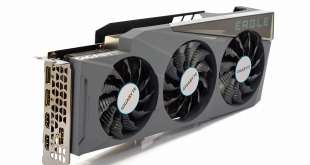 Just twenty four hours have passed since RTX 3080 reviews went live, but we are already back for more. That's because it is now the turn of Nvidia's partners to strut their stuff, with this review focusing on Gigabyte's RTX 3080 Eagle OC. Eagle is a new product series for Gigabyte, replacing the company's entry-level WindForce family, and it'll be particularly interesting to assess this model as it is priced at Nvidia's MSRP, £649 here in the UK. Has the Eagle landed, or is it yet to take off? Let's find out.

On the face of it, the Gigabyte RTX 3080 Eagle OC appears to tick all the boxes for a third-party graphics card. It has a large, triple-fan cooler, factory overclocked core, RGB lighting, full length metal backplate, and tweaked power delivery compared to a reference board. Considering it is coming in at that £649 MSRP, then, it certainly sounds impressive on paper.

In this review, we put the Eagle through its paces to see just how good it is, and whether or not it is worth your hard-earned cash. 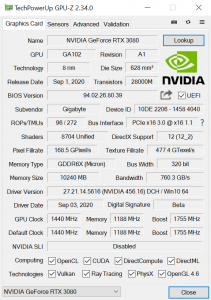 Just before diving into the details, it's worth reminding ourselves of the key specs for the RTX 3080. Built on Nvidia's GA102 GPU, fabricated on Samsung's 8nm process, RTX 3080 houses 8704 CUDA cores, 68 RT Cores and 272 Tensor cores.

A reference board would come clocked at 1710MHz, but this is the Eagle OC, and accordingly this card has a rated boost of 1755MHz. We do, of course, expect GPU Boost to bring actual frequency well above those levels, but we will look at that later in the review.

The 10GB VRAM is provided thanks to Micron's new GDDR6X memory. Operating at 19Gbps, over a 320-bit bus this gives total memory bandwidth of 760GB/s.

All of those cores, fast memory and factory overclock come at a cost, however, and that is power draw. Reference TGP for a RTX 3080 is 320W, but Gigabyte has bumped this up to 340W, making it one of the most power-hungry GPUs I have ever tested.