After the launch of Nvidia's RTX 3070 Founders Edition earlier this week, today we take a look at our first custom model. The MSI RTX 3070 Gaming X Trio has an MSRP of £539.99 here in the UK and comes with an increased power limit compared to Nvidia's reference design, alongside a factory overclocked core and a simply huge cooler. We put this card through its paces and see how it compares to Nvidia's dinky Founders Edition.

At first glance, you would be forgiven for thinking this is actually one of MSI's RTX 3080 or RTX 3090 designs. That's because the RTX 3070 Gaming X Trio is undboutedly a huge card, and it appears to be re-using the same shroud design as its bigger brothers, though the internal heatsink and cooler layout is a little different.

While this graphics card may not have the same diminutive appearance as the Founders Edition then, we would hope the significantly larger cooler will do a better job at keeping the GPU cool, while also reducing noise levels. We put that hypothesis to the test today. 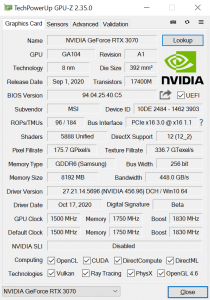 To recap its core spec, unlike its more expensive RTX 30-series brethren, the RTX 3070 uses Nvidia’s GA104 GPU, instead of GA102. This implementation of GA104 incorporates 46 Streaming Multiprocessors (SMs), and thanks to Ampere’s new SM structure with its two FP32 datapaths, each SM houses 128 CUDA cores, giving RTX 3070 a total of 5888.

Clock speed is slightly higher than the RTX 3080. Where the RTX 3070 Founders Edition has a reference clock of 1725MHz, MSI has pushed this to 1830MHz boost. The power limit has also increased from 220W up to 240W.