It's been a busy few weeks since Jensen Huang first announced the RTX 30-series in a live-streamed event from his kitchen. Last week saw the arrival of the RTX 3080, and today we are already moving on to look at the RTX 3090. While Nvidia specifically didn't call this their ‘flagship' GPU, it sits right at the top of the RTX 30-series stack, with a mammoth 10496 CUDA cores, 24GB GDDR6X memory and 350W TGP. This review is focusing on MSI's RTX 3090 Gaming X Trio model, priced at £1529.99.

Considering we reviewed the MSI RTX 3080 Gaming X Trio just last week, there may be a sense of déjà vu when looking at the RTX 3090 Gaming X Trio, as externally nothing appears to have changed. What has changed, is the configuration of the G102 GPU, so let's recap the core spec of this monster of a GPU. 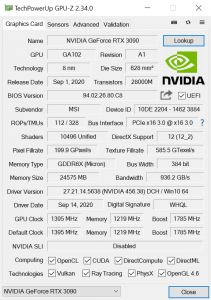 Finally, we can see MSI has pushed the clock speed slightly further than reference. RTX 3090 defaults to a boost clock of 1695MHz, but MSI has added an extra 90MHz to this figure, bringing it up to 1785MHz. Later in the review we test exactly how fast this GPU actually operates, as we would expect GPU Boost to bring clock speed well above the rated speed.