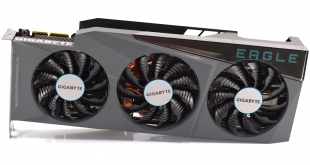 The dust has hardly settled from the launch of Nvidia's RTX 3080, but already we are back with a look at the next GPU in the stack. Sitting at the head of the Ampere family, the RTX 3090 is nothing short of a monster in terms of its spec, boasting 82 Streaming Multiprocessors, 10496 CUDA Cores, 24GB (!) of GDDR6X memory, and total memory bandwidth approaching 1TB per second. Here we look at Gigabyte's implementation of this GPU in its Eagle OC graphics card, and see just how fast this GPU is.

The Gigabyte RTX 3090 Eagle OC will look very familiar. Just last week, we reviewed the RTX 3080 Eagle OC, finding it to be a very capable card that also offers excellent value. ‘Value' is not something that applies to the RTX 3090, and this model is priced at £1449 here in the UK. For that price, we get a triple-fan cooler, metal backplate, factory overclocked core and a hint of RGB lighting – on top of the performance of the RTX 3090 GPU itself. 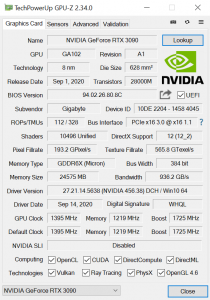 Finally, the one are where Gigabyte has tweaked things is with the clock speed. RTX 3090 defaults to a boost clock of 1695MHz, but Gigabyte has added 30MHz to this, bringing it up to 1725MHz. Later in the review we test exactly how fast this GPU actually operates, as we would expect GPU Boost to bring clock speed well above the rated speed.