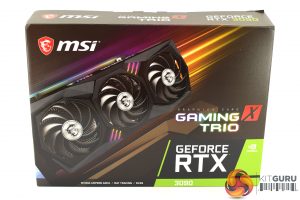 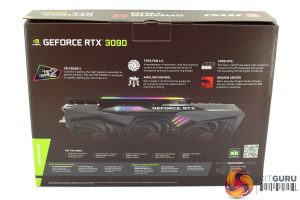 The MSI RTX 3090 Gaming X Trio ships in a dark box, with a large image of the graphics card visible on the front.

On the back, MSI has highlighted a five key features of its Gaming X Trio card, including the Tri Frozr 2 cooler, Torx 4.0 fan design and Dragon Center software. 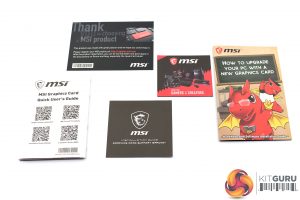 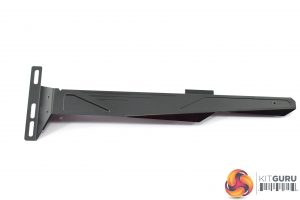 In the box, we get a total of five booklets and leaflets, including a quick start guide and warranty information. Additionally, a large GPU support bracket has also been included, which should help reduce GPU sag. 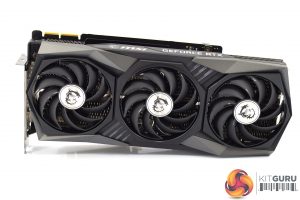 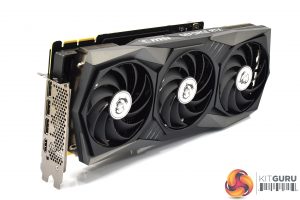 As we already mentioned, externally this RTX 3090 Gaming X Trio appears identical to its RTX 3080 brother. MSI is uses the same plastic shroud, with a fairly aggressive design, but as it is made of grey and black plastic it is entirely colour neutral.

The Tri Frozr 2 cooler is also back, with three Torx 4.0 fans, each of which measure approximately 90mm. These also feature a new design, where the fan blades come in pairs and are physically linked, which MSI says helps to ‘focus’ airflow.

Below, we take a closer look at the heatsink design. 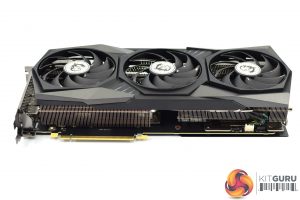 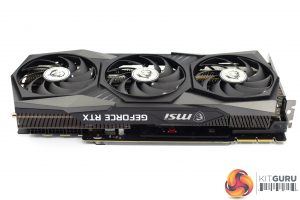 There’s no getting around the fact that this is a huge graphics card, which is why a support bracket was deemed necessary. It measures 323 x 140 x 56mm. 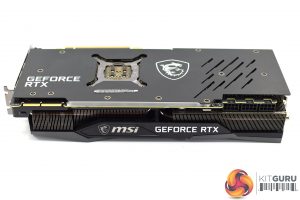 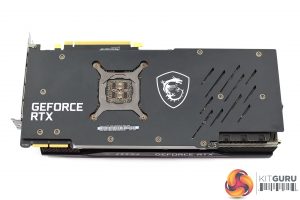 The only change to the physical design of the card, compared to its RTX 3080 counterpart, is the backplate. With the RTX 3080 Gaming X Trio, MSI uses a graphene composite for the backplate, but this has been removed in favour of a metal backplate as we will see below. It’s still a full-length backplate, with the MSI dragon logo visible on the back, but we can also see a few small cut-outs in the metal towards the end of the card.

Additionally, we can get a look at the two small NVLink fingers positioned next to the I/O bracket. RTX 3090 is the only Ampere GPU with SLI support. 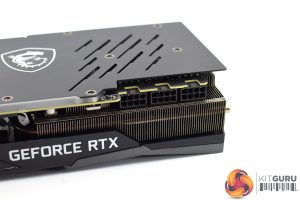 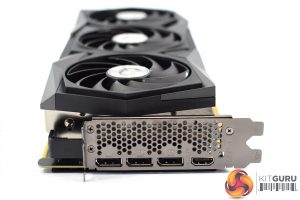 Power requirements remain at 3x 8-pin PCIe connectors. These, coupled with 75W from the PCIe slot, should be capable of delivering 525W of power.

As for the video outputs, we have three DisplayPort 1.4a connectors, and a solitary HDMI 2.1 port. 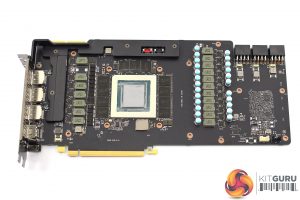 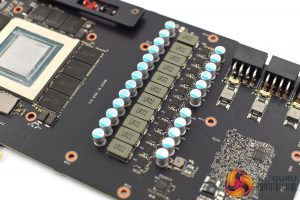 Moving onto the PCB, here MSI has kept the same board design as the RTX 3080 Gaming X Trio, but it has stepped up the power delivery. This 3090 now sports a total of 18 power stages, which are likely split with 15 for the GPU and 3 for the memory, though a 14+4 configuration is also possible.

Here, MSI is using ON Semi’s NCP302045 MOSFETs, rated for average current up to 45A and peak current up to 70A. These are co-packaged power stage solutions that integrate the high-side and low-side MOSFETs with the driver into a single package. 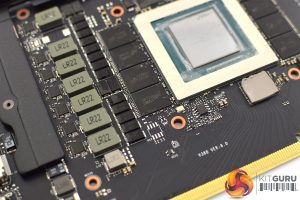 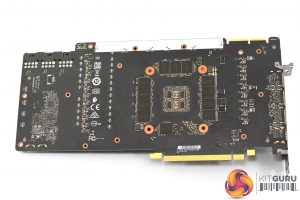 For the memory, finding space for 24 modules is difficult, so board partners have placed 12 chips on either side of the PCB. This must be why MSI felt it necessary to switch to a metal backplate with the RTX 3090, to make sure its memory cooling was up to the task.

The memory modules are of course GDDR6X chips from Micron, labelled ‘D8BGX’. These run at 19.5 Gbps. 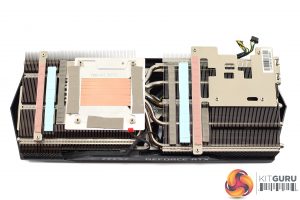 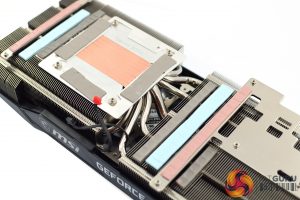 In terms of the heatsink, this is again unchanged from the RTX 3080 Gaming X Trio. This means two separate fin stacks are connected by 6x 6mm nickel-plated copper heatpipes, with seventh heatpipe measuring 8mm. These pipes make direct contact with the GPU die, with the thickest one directly in the middle, while the memory and VRM contact with additional plates via thermal pads. 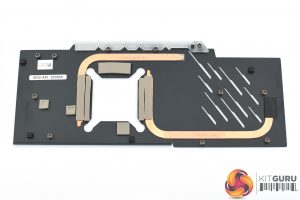 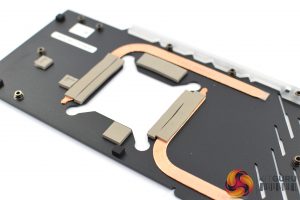 Finally, that metal backplate even sports a couple of flattened copper heatpipes, which distribute the heat from the memory modules (via thermal pads) across the backplate itself.