A week on from the launch of AMD's RDNA 2-based RX 6800 and RX 6800 XT GPUs, today we take a look at the first AIB model to come through our labs. The PowerColor RX 6800 XT Red Devil is a huge, triple-slot and triple-fan graphics card, with plenty of RGB lighting, a beefed-up VRM and dual-BIOS functionality. We put the Red Devil through its paces and see how it compares to AMD's reference design.

There is no doubt that the PowerColor RX 5700 XT Red Devil was one of the best aftermarket RX 5700 XT cards that we reviewed, delivering hugely significant improvements compared to AMD's reference blower-style cooler. That means expectations are fairly high for the RX 6800 XT Red Devil, and considering the sheer size of the thing, we are certainly looking for some thermal and acoustic improvements compared to the reference 6800 XT.

PowerColor has also sweetened the deal by adding a few extra features which the reference card lacks. There's RGB lighting on the underside, the end of the card and on the backplate, while there's the choice of either the OC or Silent BIOS, and PowerColor has even included an ARGB header to sync the RGB lighting via your motherboard. Factor in the enhanced power delivery, which PowerColor claims is able to deliver ‘well over' 400W, plus the factory overclocked core, and the Red Devil has all the ingredients to be a successful card. Let's find out whether or not that is the case. 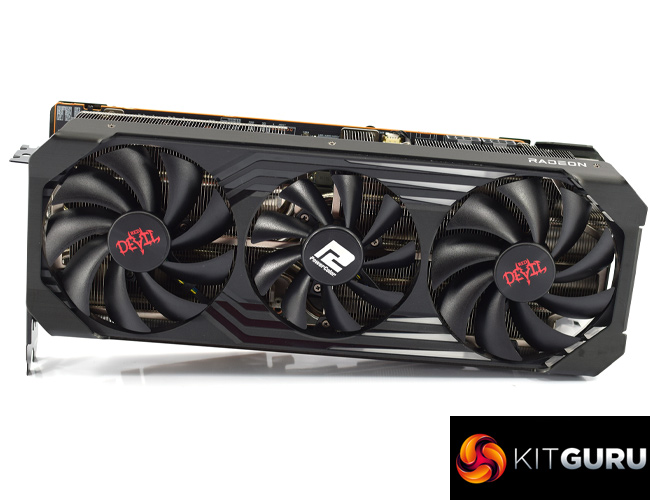 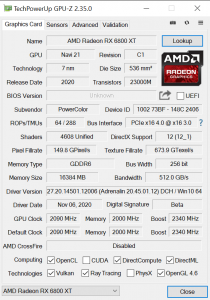 Rated clock speed has increased significantly for the RX 6000 series. The reference RX 6800 XT, for instance, has a rated game clock of 2015MHz and a rated boost clock of up to 2250MHz. The PowerColor Red Devil has increased this to 2090MHz and 2340MHz, respectively.

AMD has also increased the memory capacity, with 16GB of GDDR6 memory found on every RX 6000 SKU (so far). The memory is clocked at 16Gbps, and operates over a 256-bit memory interface for total bandwidth of 512 GB/s. AMD has also implemented a 128MB Infinity Cache on the Navi 21 GPU, to significantly increase effective memory bandwidth without excess power draw.

Speaking of power, the reference RX 6800 XT has a rated total board power (TBP) of 300W, though PowerColor has increased this for the Red Devil, as we will see later in this review.