Resident Evil Village is the latest addition to the long-running horror series, and just like last year's Resident Evil 3 remake, it is built on Capcom's RE Engine. We test over 25 GPUs at 1080p, 1440p and 4K to find out what sort of hardware you need to run this game at maximum settings, while also looking at the performance and visual quality of the game's ray tracing options.

In terms of visual settings, there are a number of options in the display menu. Texture and texture filtering settings are on offer, as well as variable rate shading, resolution, shadows, and so on. There's also selection of quick presets, and for our benchmarking today we opted for the Max preset, but with V-Sync and CAS disabled.

One interesting thing about the Max preset is the default ambient occlusion setting – FidelityFX CACAO, which stands for Combined Adaptive Compute Ambient Occlusion, a technology optimised for RDNA-based GPUs. To make sure this setting wouldn't unfairly penalise Nvidia GPUs, we tested CACAO vs SSAO with both the RX 6800 and RTX 3070: 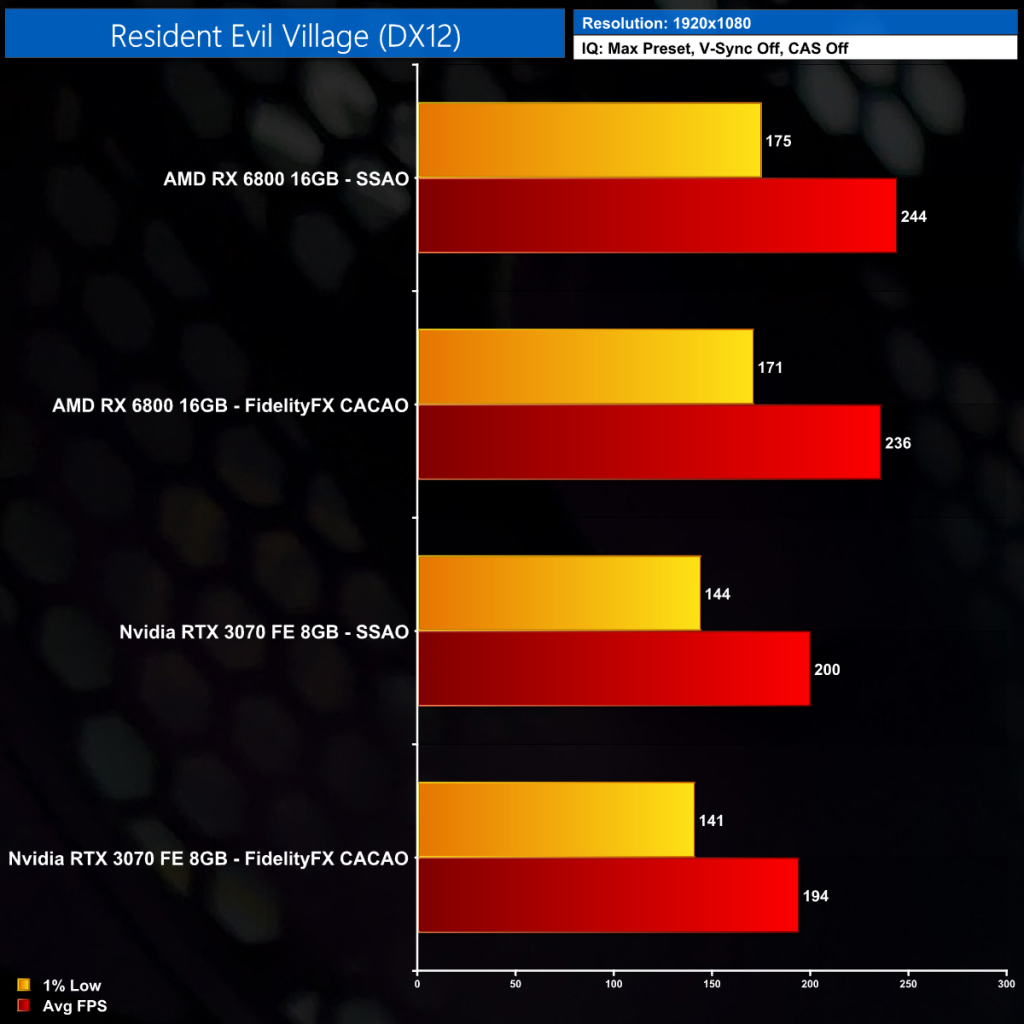 Both GPUs only lost 3% performance when using CACAO instead of SSAO, so we were happy to use the former setting for our benchmarking today.

Our 1-minute benchmark pass came from quite early on in the game, as the player descends down into the village for the first time. Over the hour or so that I played, the results do seem representative of wider gameplay, with the exception of intense combat scenes which can be a bit more demanding. Those are much harder to benchmark accurately though, as there’s more variation from run to run, so I stuck with this outdoor scene. 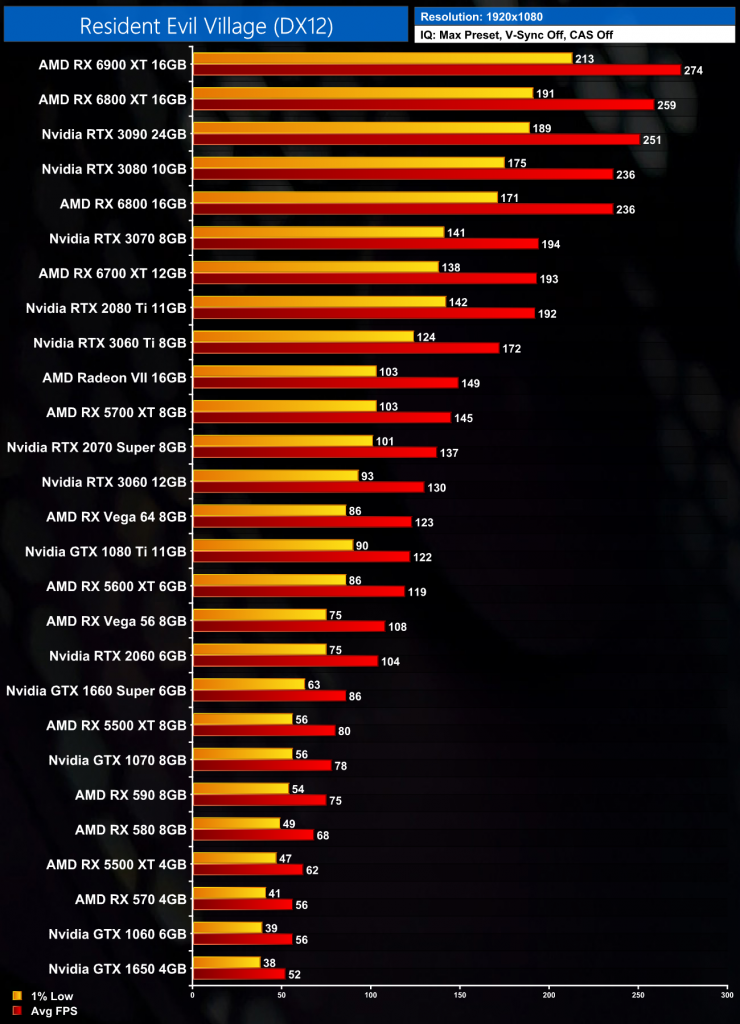 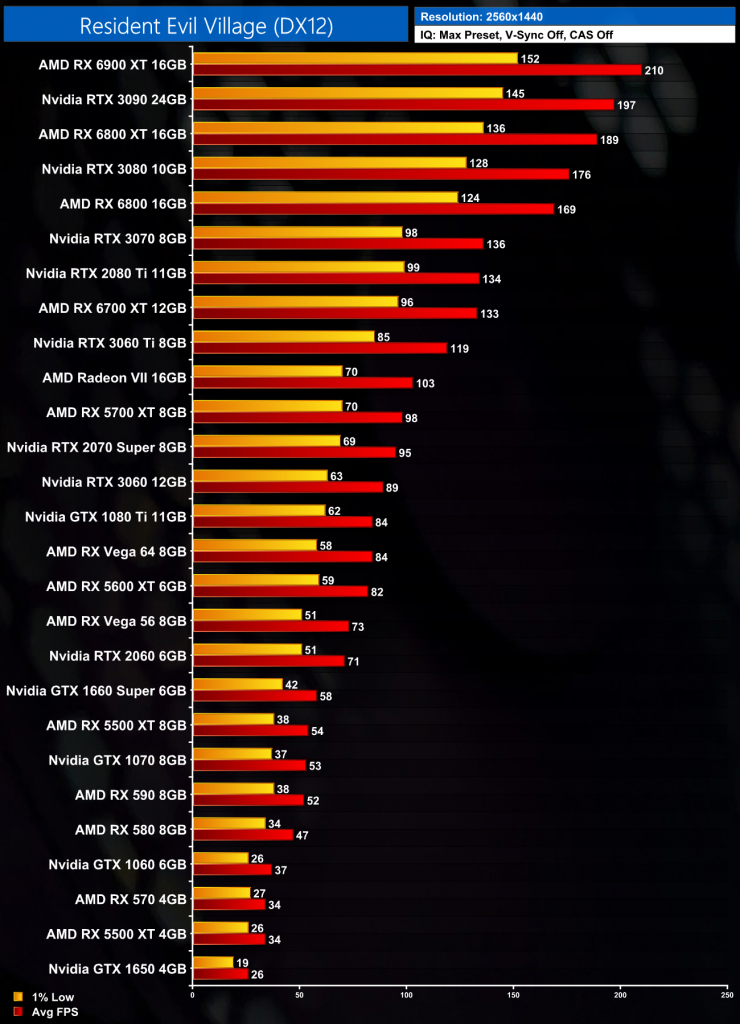 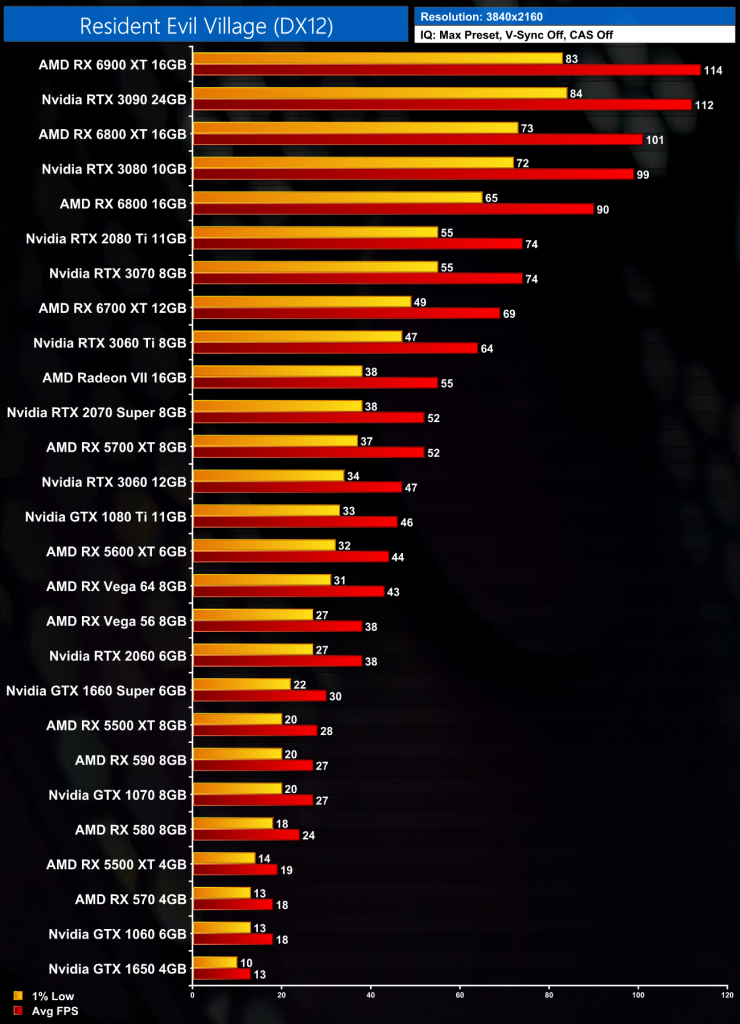 After previously looking at the Resident Evil 3 remake last year, a game which is also built on Capcom's RE Engine, I wasn't too surprised to see that overall performance is pretty similar between both games.

That's certainly a good thing though, as the game plays very well across a wide range of hardware. At the lower end, weaker GPUs like the GTX 1650, or older cards like the GTX 1060 6GB, still deliver a very playable experience at 1080p max settings. Village also scales very well, so if you have a higher-end GPU, you will be rewarded with significantly higher frame rates.

AMD does see the benefit to its partnership with Capcom for this one, as RDNA-based GPUs do over-perform here compared to the average performance we’d expect from those cards. The RX 6700 XT is matching the RX 3070 for instance – when we'd typically expect it to be slower – while the RX 6900 XT is 7% faster than the RTX 3090 at 1440p.

In terms of visual fidelity, I don't think the RE Engine delivers a cutting edge experience like you'd get from Cyberpunk 2077 or Red Dead Redemption 2 when using Ultra settings, but it still looks good and I am particularly impressed with the detailed character models.

The only negative point for me is that the ray tracing is pretty underwhelming. As we demonstrate in the video above, it doesn't really deliver much extra from a visual perspective, at least in my opinion. Overall though, Resident Evil Village looks good and runs well on pretty much any GPU, so it definitely gets a thumbs up from me.

KitGuru says: Capcom's newest game built on the RE Engine delivers impressive performance and looks good while doing so.