Exclusive Interview with Richard Huddy from Intel at GDC

One thing that Huddy would not be drawn on was the relationship between Intel Core processor clock speeds and the corresponding increase in graphics power.

There’s no doubt that the launch of Haswell left the overclocking community with a distinctly lacklustre feel toward the processor. Unlike previous generations, there was no clear ‘People’s Champion’ – a Q6600 D0 type processor which could be severely clocked and stil stand up.

KitGuru believes that Broadwell ‘K’ chips have been designed to counter that feeling and put Intel chips firmly back into the hearts and minds of the enthusiast. Specifically, we believe that they will clock past 5GHz without special kung-fu or exotic cooling.

If that’s the case, then the graphics performance of Broadwell K processors with Iris Pro graphics could well rival what we see from the low to mid-range cards from AMD and nVidia. That could affect cashflow around the graphics industry. 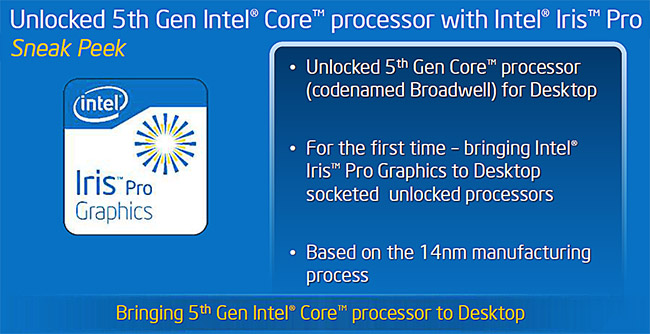 Previous How Intel plans to reinvent the desktop
Next Crytek, Epic make engines available on subscription