During the announcement of the Radeon RX 6700 XT graphics card, AMD also confirmed that it will bring Smart Access Memory support to the Ryzen 3000 series desktop processors, excluding the Ryzen 5 3400G and the Ryzen 3 3200G.

It seems AMD has taken the community's feedback into consideration and decided to enable SAM (Smart Access Memory) on Zen2-based processors. The confirmation was made during the “Where Gaming Begins: Episode 3” stream yesterday. AMD also confirmed that SAM will bring about the same performance increase (up to 16%) on systems using Ryzen 3000 CPUs as it does on the ones using Ryzen 5000 CPUs.

AMD Smart Access Memory is a technology based on the PCIe Resizable BAR standard. By using SAM/PCIe Resizable BAR, the data channel between the CPU and the GPU is expanded, increasing bandwidth, which results in a theoretical performance increase. 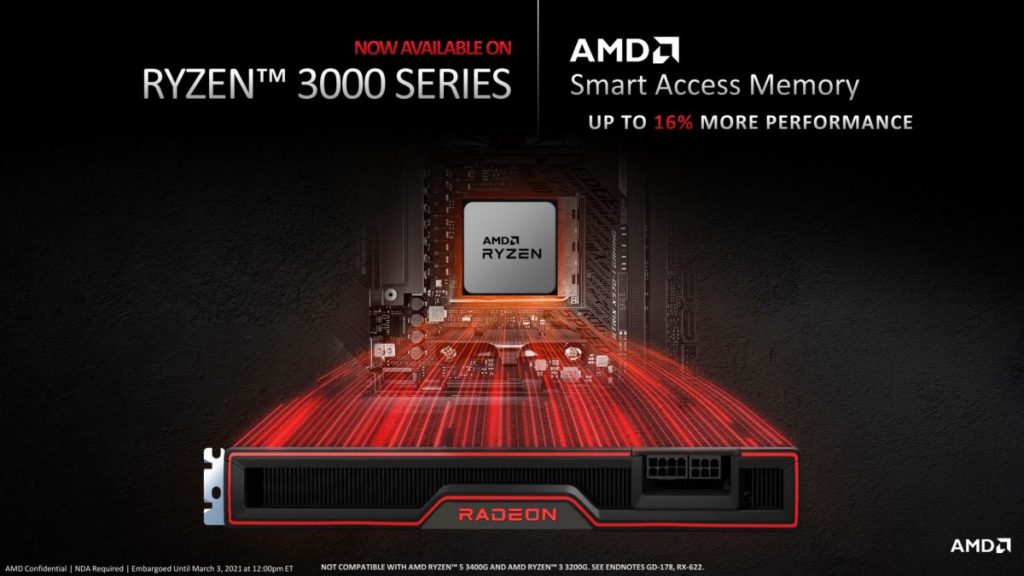 This is a move that we did see coming eventually. We have previously shared screenshots of Asus and MSI motherboards with SAM enabled while using Zen and Zen2 processors, meaning that the ability to enable it was more of a restriction from AMD than an incompatibility.

Nvidia also has announced recently that it will bring PCIe Resizable BAR support to its RTX 30 series graphics cards. Nvidia mentioned that AMD 400-series motherboards would be compatible, but only when using Zen3 processors. Considering AMD's announcement, Nvidia might extend it to the Zen2 processors as well.

KitGuru says: Do you own an AMD Ryzen 3000 series processor? Will you enable SAM once AMD has released the appropriate BIOS for your motherboard?