During Architecture Day 2021, Intel introduced its own super-sampling technology named XeSS. Although the company has revealed some details about this technology during its presentation, additional information has now been shared in an interview with Intel Principal Engineer Karthik Vaidyanathan.

During an extensive interview with Wccftech, Karthik revealed new details about Intel's Super Sampling tech. For instance, like Nvidia DLSS 2.0, Intel XeSS is a neural network-based technique that won't require per-game training. However, it will be superior in one key aspect: instead of using 16 samples per pixel, it will use 64.

Intel XeSS will offer broader compatibility than DLSS 2.0 but still less than AMD FSR. Only GPUs supporting Microsoft Shader Model 6.4 or above will support Intel XeSS, and that's thanks to its DP4a variant. Some of these GPUs include Nvidia Pascal and Turing, as well as AMD RDNA 1 and 2. Besides the DP4a variants, Intel will also release the XMX variant, which will work exclusively with Intel Arc GPUs. Despite being targeted at different types of GPUs, both variants will use the same API. 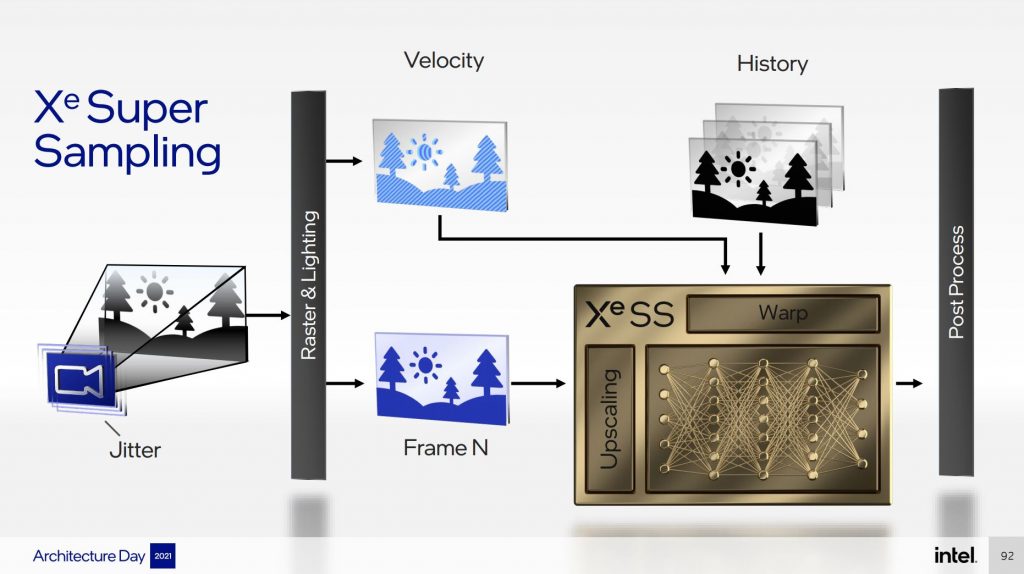 Additionally, Karthik said that the XMX XeSS won't use Nvidia Tensor cores because there are no Matrix acceleration standards to build a cross-platform solution. He also added that there will be no FP16/FP32 fallback option like AMD FSR, which allowed the red team's technology to be supported by GPUs as old as the Radeon RX 480/470/460. One similarity shared between AMD FSR, Nvidia DLSS 2.0, and Intel XeSS is that all three have multiple quality modes to choose from.

Although Intel has yet to release XeSS, the company is already planning the next two versions of its super-sampling technology. Intel will release the XMX-based XeSS SDK to developers this month. The DP4a SDK is expected to come out later this year.

KitGuru says: From what we already know about Intel XeSS, it looks like it will be a worthy contender.