Just as expected, today AMD is expanding its Radeon RX 6000 series of graphics cards, introducing the RX 6600 XT. Aimed at 1080p, high refresh-rate gaming, the RX 6600 XT packs all the features we’ve come to expect from RDNA 2, including support for DX12 Ultimate, Smart Access Memory and the latest FidelityFX enhancements.

In terms of specs, the RX 6600 XT packs 32 Compute Units, 32MB of Infinity Cache, 8GB of GDDR6 memory and a 160W TDP – the ‘Game Clock’ speed is set at 2359MHz. With all of that packaged together, AMD’s internal testing shows up to 2.5x more performance at 1080p compared to the GTX 1060, a card that still ranks amongst the most used on the Steam Hardware Survey today.

Compared to the RX 5600 XT, AMD’s numbers show the RX 6600 XT delivering up to 1.7x more performance. Compared to the newer Nvidia RTX 3060, the RX 6600 XT trades blows in some titles, like Cyberpunk 2077 and Horizon Zero Dawn, but handily wins in other titles, like Hitman 3, Resident Evil Village and Assassin’s Creed Valhalla. Do bear in mind these are first-party benchmarks, and we will need to run our own tests as part of our review, but they clearly show AMD taking the RTX 3060 head-on.

For competitive esports titles, the RX 6600 XT should face no issues, offering hundreds of frames per second in titles like CS:GO, Rainbow Six Siege and Valorant. We’ll have to wait a couple of weeks for reviews to get broader, more detailed performance comparisons between the RX 6600 XT and other graphics cards on the market.

As you would expect from an RDNA 2 GPU, new features like AMD Smart Access Memory, Radeon Boost, Radeon Anti-Lag and of course, FidelityFX Super Resolution, are all supported on the RX 6600 XT. If you’re building an all-around AMD gaming rig, then features like SAM will help you gain additional performance to further boost frame rates, while the likes of Radeon Anti-Lag will help ensure latency remains low. 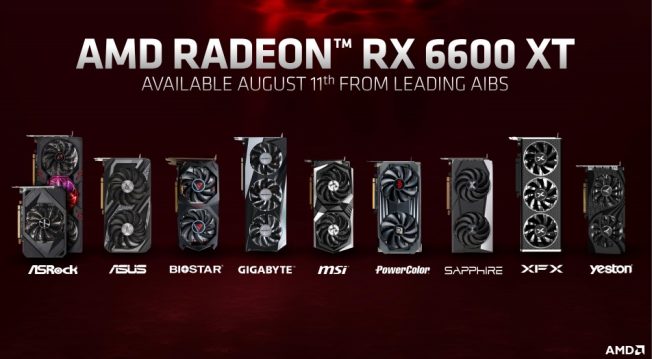 The Radeon RX 6600 XT will be available in gaming PCs from a number of OEMs, including Dell/Alienware, HP and Acer. For DIY builders, board partners like ASRock, ASUS, Biostar, Gigabyte, MSI, PowerColor, Sapphire, XFX and Yeston will be shipping custom-cooled RX 6600 XT graphics cards. Unfortunately, AMD has no plans to sell a reference-design model.

The Radeon RX 6600 XT will be available starting on the 11th of August. MSRP pricing is set at $379 USD, we’ll update with UK suggested pricing once that information becomes available.

KitGuru Says: The RX 6600 XT is looking like a promising 1080p card on paper, now we’ll just have to wait and see what reviewers have to say. Are any of you hoping to get your hands on an RX 6600 XT when they release?

Previous Returnal sells half a million copies, as Miles Morales surpasses 6.5 million
Next Kena: Bridge of Spirits delayed by one month