Rumour claims a GTX 1070Ti may be on the way

With the RX Vega now out in the wild and Nvidia remaining tight lipped about Volta, there has been a lack of graphics card news recently. However, one new rumour did pop up this week, pointing towards the existence of a GTX 1070Ti, presumably to combat against the RX Vega 56.

This week, the following image appeared on the Chinese forum, Baidu, appearing to show a system configuration featuring an Intel Core i7-7700K and curiously enough, a GTX 1070Ti. 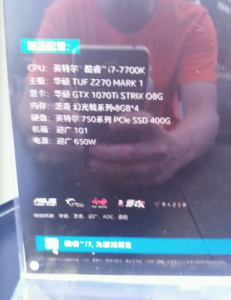 According to the report on Videocardz, the 1070Ti is supposed to feature around 2304 CUDA cores, which seems very hard to believe given how close that would come to the GTX 1080. The GTX 1070TI is also listed as being a STRIX O8G model from Asus.

We are unsure where this image was taken, so this could be causing an unecessary stir. It could have just been a typo. It is also worth noting that we did hear some GTX 1060Ti rumours last year that didn’t pan out, so this could be another case of that.

KitGuru Says: In my opinion, it would make more sense for Nvidia to just lower prices of the GTX 1080 and 1070 a bit to combat Vega, rather than introducing another card to the stack. There is only so much wiggle room between the 1070 and 1080 as it is. What do you guys think of this rumour? Do you think Nvidia should add another Pascal card to its lineup this late in the cycle?