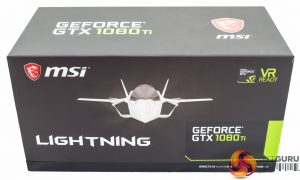 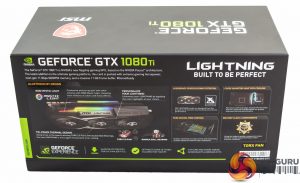 No flagship graphics card is complete without an oversized box, MSI’s GTX 1080 Ti Lightning Z meets that requirement for sure. 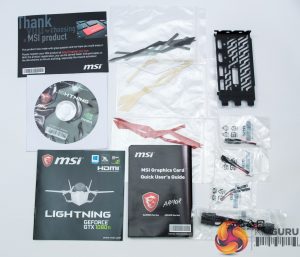 MSI bundles the graphics card with an alternative triple slot I/O shield, three voltage read-off cables for the corresponding headers, a 6 pin to 8 pin adapter cable, some documentation, a driver DVD and a set of decal strips if you don’t like the default silver colour. Strangely enough “lightning-style” yellow is not one of the optional colours – there is red, black and gold.

MSI’s decision to ditch the Lightning yellow is probably well-founded and the neutral colour scheme put in its place undoubtedly has a wider appeal. Nonetheless there’s something missing and at a quick glance it just doesn’t look like an MSI Lightning graphics card.

Nostalgia aside though the MSI Lightning Z is a highly imposing graphics card with its brash 2.5 slot cooling solution. When paired with the RGB Lighting the scope to mould the Lightning Z to any build is there which will probably allow MSI to shift all 3000 units with relative ease.

Weighing in at 1.7kg and measuring 32cm in length and 13cm in height, the Lightning Z is a sizeable beast. MSI uses a triple fan design, instead of a dual fan design seen on previous Lightning models. The two outer fans are 100mm and the centre fan is 90mm, all three use double ball bearings and are built to MSI’s Torx 2.0 design specification. 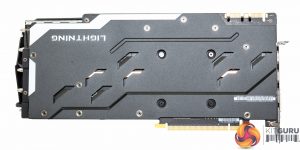 The backplate is perforated to allow some airflow to the heat pipe which runs along the centre of the backplate. Focusing in on the side-profile and the three 8-pin PCIe power cable requirement stands out. Note that the third connection is mandatory and the system will not boot without it. That said in practice the third connection is mainly there for extreme overclockers looking to push obscene amounts of power through the GPU while under LN2.

Just to the right of the SLI connections is the vBIOS switch which toggles between a standard mode and an LN2 mode. By toggling the DIP switch to LN2 mode it removes power, current (amperage) and thermal restrictions on the GPU. 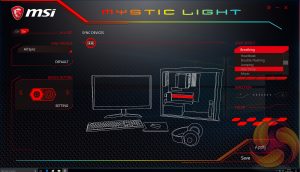 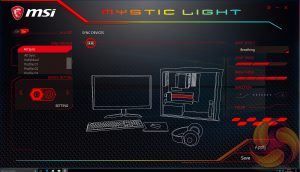 The LED extent almost covers the whole graphics card and is split into two main sections – one on the top and one on the backplate. These are very bright and vibrant and give a great aesthetic appeal that even other “RGB” graphics cards just can’t match. Put simply the “light show” is much more impressive than on most of its competitors. 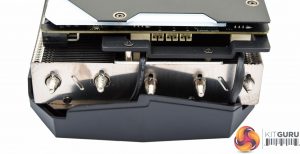 At one end of the card MSI has tacked on voltage check points for those users inclined towards the dark art of extreme overclocking. At the opposing end MSI offers a wide selection of Display outputs – two HDMI 2.0b, two DisplayPort 1.4 and one Dual-Link DVI-D. VR users should be well catered for with the dual HDMI.

A close up on the backplate reveals it quite literally is a single copper heat pipe spread across the length. It makes direct contact PCB components to provide additional cooling capability.

The heatsink is an impressive behemoth too with 6 heat pipes snaking off in various directions. Four are 6mm and two are 8mm. 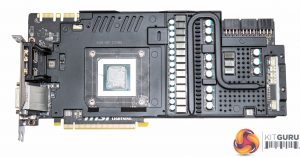 The pièce de résistance for most will be the PCB which has an impressive 14 phases for the GPU core and a further 3 phases tie up the memory. MSI uses digital PWM controls, solid dark capacitors,  Hi-c capacitors, super ferrite chokes and “3 in 1” 60 amp DrMOS MOSFETs.