Crysis Warhead: Take on the fight as the volatile Sergeant “Psycho” Sykes in a new parallel story taking place during the events of Crysis. Psycho’s secret mission will take him to the other side of the island on a ruthless pursuit of a North Korean general hell-bent on obtaining powerful technology. With the versatile powers of his Nanosuit and an arsenal of fully customizable weapons & vehicles at his disposal, Sykes will do whatever it takes to carry out his top-secret objective.

Action on the other side of the island is more intense, the battles are fierce, and the mission protocol is no longer “Adapt to Survive”. As Sergeant Sykes, now you must adapt to dominate the battle. Twin SMG’s blazing, seizing new vehicles, or going stealth, the action and the victory is on your terms.

For our testing today we are using the Gamer preset for graphic details. We will be testing at the resolution of 1920×1080 pixels using our 24″ Samsung LCD monitor. We will run each test 5 times and the average results of the 5 tests will be represented by the numbers in our graphs.

When testing Crysis Warhead we were very impressed by the fact that a card priced as modestly as the Galaxy GTX 460 GC was able to produce an average of 36 FPS at 1920 x 1080. Don’t let the score of 15 FPS as our minimum fool you, during testing we experienced very few areas where any hitching was visibly noticeable.  Many more expensive cards tested in the past have not produced the results we achieved with the Galaxy GTX 460 GC. 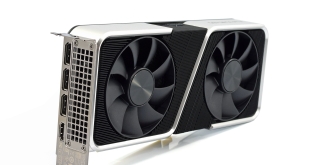 Up til now, Nvidia has been using a GA104 GPU variant to power the RTX …