HGST, a subsidiary of Western Digital Corp., has demonstrated its highly-anticipated 10TB hard disk drive at the Linux Foundation Vault trade-show in Boston, Massachusetts. The new drive is already in mass production and will be released commercially shortly.

ZDNet has managed to picture the prototype of the 10TB SMR HelioSeal hard disk drive, the industry’s first HDD that can store such incredible amount of data. The hard drive features a massive sticker and is clearly not a commercial version of the product, but it proves (assuming that HGST just did not put a sticker on another drive) that 10TB HDDs exist. It is unknown whether HGST demonstrated the hard disk drive in action or not during the trade-show. 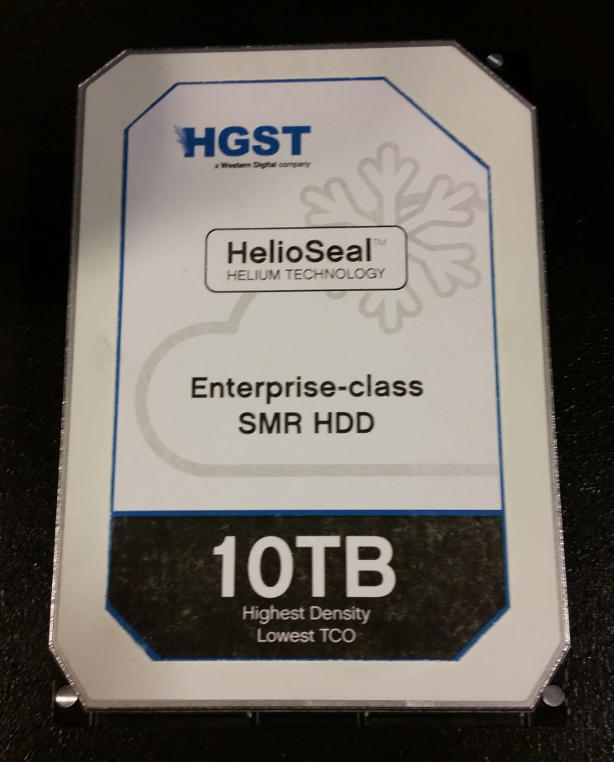 The HGST 10TB UltraStar HelioSeal hard drive is based on seven 1.43TB SMR [shingled magnetic recording] platters and is filed with helium. Nothing else, including spindle speed, cache size, interfaces, performance figures, etc. is known about the novelty.

The ultra-large capacity HGST HelioSeal HDDs are designed for cool-to-cold storage applications. The main goals of cold data storage applications is to store maximum amount of data per cubic meter of a datacentre while consuming the lowest amount of energy. Typical 42U capacity-optimized storage cluster can hold 360 3.5” hard disk drives. With 10TB drives, capacity of 42U rack will total 3600TB of data.

If HGST releases its 10TB HDDs in the second quarter, then its customers will start deploying such drives sometimes in late Q3 2015. Since the 10TB UltraStar HelioSeal hard drive provides a number of advantages over competing solutions, it is likely that such HDDs will become rather popular among those, who need to store vast amounts of cold data. HGST believes that this year its HelioSeal hard drives will finally be adopted widely.

KitGuru Says: Looks like HGST is on the finish line with its 10TB HDDs for datacentres. I wonder how long it will take hard drive makers to create 10TB drives for consumers.