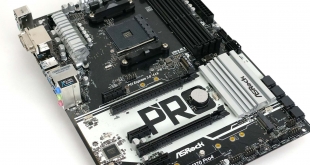 ASRock sent us the X370 Pro4 just before the launch of AMD 2nd Gen Ryzen. This was unexpected because we knew full well the new Ryzens would be accompanied by the X470 chipset, which meant the X370 Pro4 felt old before its time.

There was method to ASRock’s apparent madness as they wished to demonstrate that motherboards with the X370 chipset could support the new generation of CPUs, provided the BIOS was up to date. Our sample of X370 Pro4 came with a ‘2nd Gen Ready’ sticker on the box and when we installed a Raven Ridge Ryzen 5 2400G it did indeed work perfectly.

Note: if the above gallery is not displaying, you may need to disable Ad Block as it is known to interfere with our site code.