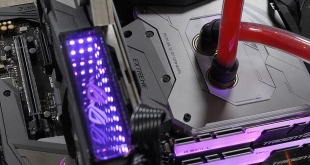 It may seem crazy to start 2018 with talk of a Kaby Lake motherboard but Asus Maximus IX Extreme proves the Z270 platform is not yet dead and buried. Asus has used its entire bag of ROG tricks to ensure that Maximus IX Extreme is the ultimate Z270 motherboard not only in terms of performance and overclocking, and also styling. This E-ATX motherboard is supplied with a Bitspower monoblock that cools the CPU, VRMS and also the primary M.2 slot. Naturally the monoblock matches the styling of the Maximus IX Extreme and when the hardware is installed you are ready to connect a custom loop cooling system with the minimum of trouble.

If you cannot see the gallery above then whitelist us in your ad blocker as they can interfere with our display code.

The Asus Maximus IX Extreme is supplied without traditional VRM heat sinks so you cannot simply use a conventional All In One or a CPU block from one of the usual brands such as Alphacool or EKWB. Instead you are obliged to use the supplied Bitspower monoblock, which probably accounts for about £150 of the Maximus IX Extreme package. When you install the monoblock you will need to allow about half an hour for fiddling with thermal pads and small, annoying screws. Installing the CPU cooler took time but was straightforward however the M.2 SSD heat sink was tricky as the screws are precisely the correct length where it would have been useful to have an extra couple of millimetres to work with.

Once the big chunks of hardware were in place we found the 8-pin EPS connector from the power supply was a close fit and the RGB connector for monoblock looked like an afterthought. Having said all that, the finished assembly looked imposing and felt like a piece of battleship engineering that was ready to connect to an open loop custom cooling system.

We used the same hardware that featured in our review of the Asus ROG Poseidon Platinum GTX 1080 Ti graphics card but left the graphics card running in air cooled mode so we could focus on the CPU. 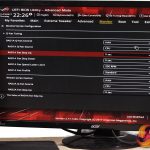 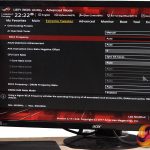 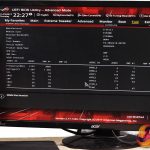 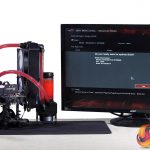 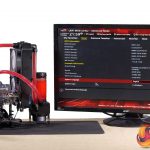 As you will see in our video above, the UEFI set-up screen is superb and gives you complete control over every aspect of your hardware. The irony is that once you have enabled XMP and booted into Windows you can pretty much rely on the AI Suite 3 software to overclock your CPU. It is worth pointing out that driver support for Windows varies from one motherboard manufacturer to another. When Intel launched Z370 for Coffee Lake we saw that drivers were only officially available for Windows 7 and Windows 10, however some motherboards such as ASRock Z370 Extreme4 only support Windows 10.

We have been using Windows 10 for quite some while and consider it to be an essential upgrade however it seems some people are determined to stick with Windows 7 (There seems to be no great love for Windows 8 or 8.1).

Asus lists a full set of Maximus IX Extreme drivers for Windows 7, 8, 8.1 and 10 but if you take a close look at the Asus Z370 range you will find that, for example, Asus ROG Crosshair VI Hero is only supported with a full set of drivers for 64-bit Windows 7 and 10. If you are determined to stick with Windows 7 it is still possible to move on from Skylake or Kaby Lake to Coffee Lake, however that strikes us as a curious way to make your buying decision.

Returning to Asus ROG Maximus IX Extreme, the default overclock for Core i7-7700K is 4.8GHz using AI Suite 3 software. You can then simply enter the UEFI and increase the multiplier from 48x to 49x, or even higher if you are determined to hit 5GHz or more without any need to manually adjust voltages. This is a quick and easy approach to overclocking that probably won’t sit well with ROG customers as are the type of enthusiast who want to break out the thermal probes and multimeter to check they are using the lowest possible voltages for the highest clock speeds.

Once you have your CPU running at the desired speed you can take a step back and admire what Asus has done with the ROG Maximus IX Extreme. There is RGB lighting on the I/O, in the monoblock and in the chipset cover that can all be controlled with AURA software. If you add in suitable RGB DDR4 RAM such as G.Skill TridentZ and, perhaps, the ROG Poseidon graphics card you have a truly fantastic light show. We particularly like the way Asus has extended the RGB to the audio jacks which are illuminated for effect and use the correct colour codes so you can be sure you are connecting the speakers to green, microphone to pink and so on.

The rest of the I/O panel is an impressive piece of work with USB 3.1 Types A and C, 6x USB 3.0 ports and a couple of antennae connections for the 802.11ac Wi-Fi. We are unsure about the value of the graphics connectors on the panel as it seems unlikely anyone will use the Intel IGP, unless they are doing some fault finding and need to eliminate their PCI Express graphics card from the equation. On the motherboard you will find a long list of headers and connectors including one each of USB 3.1 Generations 1 and 2, 2x USB 2.0, 8x SATA and 12 fan connectors, as well as an external fan control board, a full set of Asus ROG micro buttons and a POST code display.

If Asus has missed any features from the extremely long list we did not spot it as they seem to have included pretty much everything under the sun. While we much prefer the ATX form factor to E-ATX it has to be said that Asus has filled the board with hardware and has not wasted any of the space.