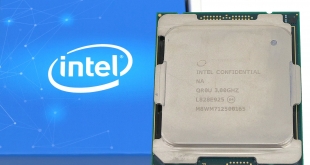 When Intel launched the 18-core Core i9-7980XE in September 2017  it was a clear response to AMD’s 16-core Threadripper 1950X. In 2016 we had got used to the idea of HEDT (High End Desk Top) CPUs with up to ten cores so Intel’s sudden jump to 18-cores was quite startling and also drove the price up to US$2,000. Fast forward another year to Intel’s recent New York briefing for Intel’s 9th Gen. Desktop CPUs, including the eight core Core i9-9900K and out of the blue we were also told about 9th Gen. Skylake X which included the 18-core Core i9-9980XE Extreme Edition.

On the face of it the i9-9980XE looked very similar to the preceding i9-7980XE with only modest changes to the clock speed and the welcome addition of a soldered heat spreader. Headline features that have been carried over from i9-7980XE to i9-9980XE are 18 cores/36 threads, 18MB total L2 cache (1MB per core), 24.75MB total L3 cache, 14nm fabrication process and an Intel list price of US$1,999. It was immediately clear the i9-9980XE did not truly deserve to be called 9th Generation as any changes looked more like detail revisions than significant updates. Nonetheless we could hardly wait to strap this new monster CPU to our test bench and see how well it performed.

The specifications of 7th Gen. and 9th Gen. Core-X CPUs are very similar, although Intel has made a significant change beneath the surface that does not, ironically, have any impact on Core i9-9980XE. With the 7th Gen. HEDT part Intel used LCC (Low Core Count) silicon in the lower end of the range and HCC (High Core Count) silicon for the higher core counts. With 9th Gen. Core-X Intel has used HCC silicon throughout the Core-X range which means the models with 10- and 12-cores have gained a significant amount of cache memory. By contrast the 14-, 16- and 18-core models are unchanged in the cache department.

Intel’s release of Core i9-7980XE was a clear response to the 16-core Threadripper 1950X, however it was a very good response. The combination of 18 cores with higher clock speeds made for an impressive piece of hardware, despite the sky high price. By contrast Core i9-9980XE has arrived in a world where AMD has updated the 16-core Threadripper to the 2nd Gen. 2950X and has also released the 32-core 2990WX.

This makes life complicated as we need to take a step back and consider exactly what HEDT is all about. The first HEDT CPUs launched with prices that topped out at £650 with a core count that was one step ahead of the regular desktop parts used by gamers. Prices increased to £1,000 and then £1,500 with the 10-core i7-6950X, however the world of desktop CPUs started to shift when AMD debuted the Ryzen 7 1800X in March 2017 with 8-cores and clock speeds around 4GHz. This was a convincing riposte to the quad core Kaby Lake i7-7700K, however AMD Threadripper 1950X was the CPU that really changed things in the summer of 2017.

AMD’s radical new approach to CPU design meant they were able to update Threadripper extensively in 2018 to such an extent the £800 Threadripper 2950X qualifies as HEDT while the Threadripper 2990WX  is in a class of its own. On the one hand the £1,600 price tag falls plumb in the middle of the Intel Core-X range that stretches from £1,000 to £2,270, but on the other hand the 32 cores make the 2990WX superb in CPU-intensive workloads. Conversely Threadripper WX is unimpressive in general purpose duties such as gaming.