Intel managed to cling onto the title of world’s biggest chipmaker for 25 years before Samsung dethroned the company at the end of 2017. Although the South Korean manufacturer retained the title for another year, slower DRAM sales could see Intel once again retake the crown.

Despite holding the record since 1992, Intel’s $62.8 billion (KRW 67 trillion approx. before inflation) wasn’t enough to outmatch Samsung’s semiconductor revenue of $69.1 billion (KRW 74.26 trillion before inflation). Market researchers at IC Insights have predicted that Intel will return to the top spot in 2019, as the firm outlines an expected 7 percent decline in the semiconductor industry and a 24 percent decrease in the memory market in particular. 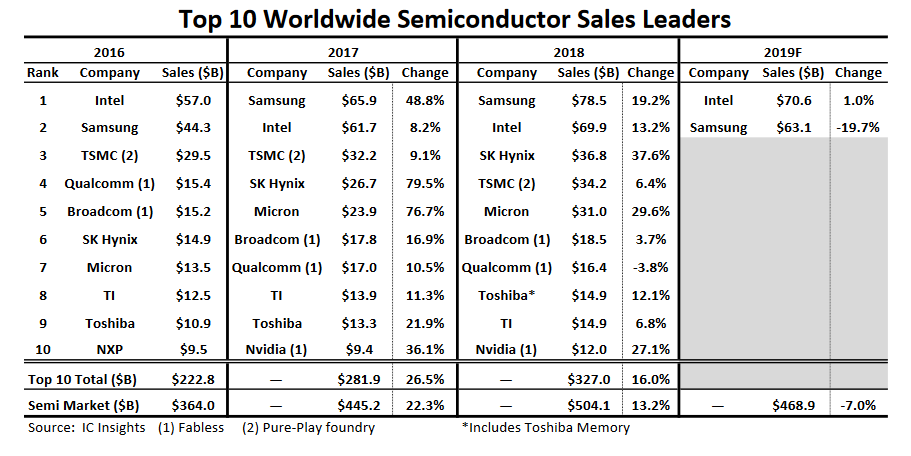 Although IC Insights expects Intel to grow just 1% year-on-year, the firm believes Samsung’s grip will loosen due to a staggering 19.7% decline given that the South Korean supplier is dependent on memory for its chip sales. If the memory market suffers, Samsung suffers much more than its multifaceted competition as a result.

Researchers have yet to factor in how this downward trend will affect other companies in the DRAM and NAND flash markets, but manufacturers such as SK Hynix, Micron, and Toshiba are to expect declines 20 percent or more. It will also be interesting to see how this affects pricing on the consumer market, as the price of memory has steadily been coming down over the past year.

KitGuru Says: It’s worth noting that IC Insights has worked out its prior sales according to the current exchange rate, accounting for any disparity between numbers reported at the time and now. Still, this doesn’t affect the decline that the firm expects to hit the memory market like a whirlwind.