Asrock, one of the world’s largest makers of mainboards, this week announced an ultimate mini-ITX mainboard that can not only enable small form-factor desktops with performance on par with full-size workstations, but also leading-edge functionality not found on many high-end PCs nowadays.

The Asrock X99E-ITX/ac is the industry’s first mainboard in mini-ITX form-factor designed for Intel Core i7 “Haswell-E” microprocessors for high-end desktops (HEDTs). Thanks to the power provided by up to eight x86 cores, small-form-factor (SFF) systems built using the X99E-ITX/ac will offer tremendous performance in games and professional applications. Unfortunately, due to SFF constraints, there is a nasty sacrifice that Asrock had to make.

The new Asrock X99E-ITX/ac motherboard is equipped with modified LGA2011-3 socket with additional pins (also known as the O.C. socket) that supports Intel’s latest HEDT chips and allows to significantly increase their core voltages (Vcore) for maximum overclocking potential. The socket is narrower than desktop LGA2011-3 sockets, hence, it may not be compatible with all retail PC coolers. Since the mainboard is very tightly integrated, Asrock only could mount two 288-pin DDR4 DIMM slots for memory, thus, sacrificing quad-channel memory mode that Intel Core i7 Extreme processors support. While dual-channel DDR4 memory sub-system at 2133MHz provides up to 34GB/s of bandwidth, many heavily-threaded and bandwidth-hungry applications will clearly not be able to use the whole potential of Intel’s “Haswell-E” central processing units. 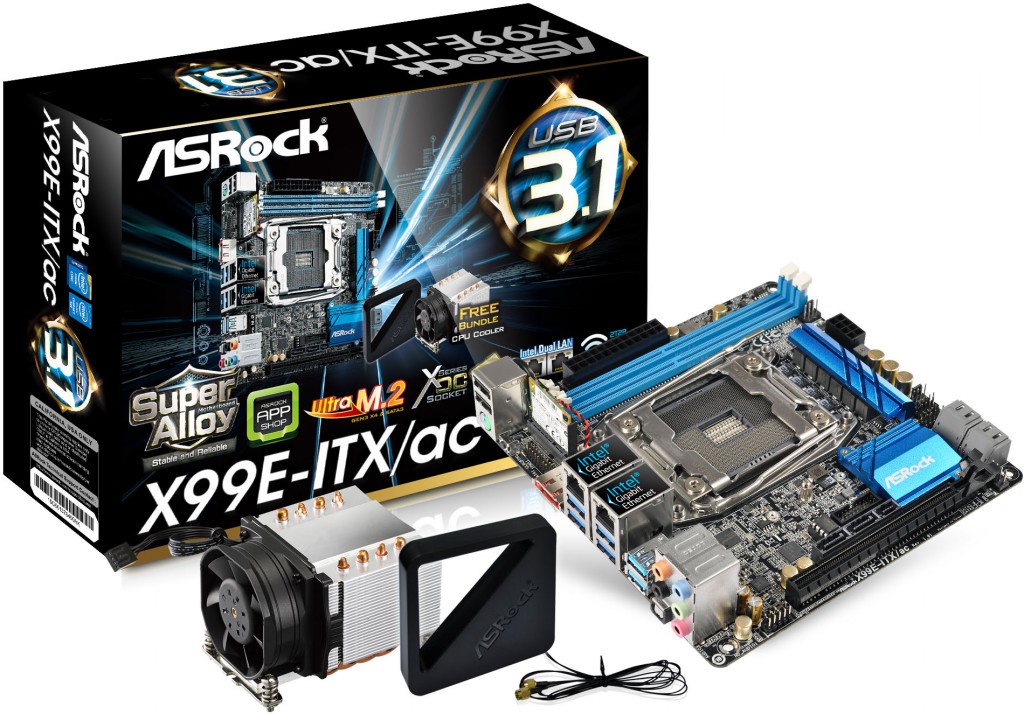 But while a compromise had to be made with memory configuration, Asrock made no compromises when it comes to functionality of the motherboard. The X99E-ITX/ac features one PCI Express 3.0 x16 slot for graphics cards, one enhanced M.2 slot that uses PCIe 3.0 x4 interconnection and provides up to 4GB/s of bandwidth for high-end solid-state drives, one SATA Express connector, four Serial ATA-6Gb/s ports, two USB 3.1 ports (powered by the Asmedia ASM1352R controller), six USB 3.0 ports, two Intel Gigabit Ethernet controllers, Wi-Fi 802.11ac wireless network controller, 7.1-channel audio and so on. The mainboard is built on an advanced printed circuit board and uses high-quality components for maximum reliability and durability. Asrock also bundles a special mini-ITX case-compatible CPU cooler with its platform.

Asrock will showcase its X99E-ITX/ac at the upcoming CeBIT 2015 trade-show in Hannover, Germany, next week. Pricing of the new motherboard is unknown, but since it is currently the world’s only LGA2011-3 mainboard in mini-ITX form-factor with plenty of features, we are talking about the price north from £200/$250.

KitGuru Says: The Asrock X99E-ITX/ac is, without any doubts, the most advanced mini-ITX mainboard announced so far. It is clearly not ideal: it does not support quad-channel DDR4 memory or multi-GPU configurations, it uses a custom server LGA2011-3 socket and therefore is not compatible with loads of PC coolers, it lacks USB 3.1 type-C ports. Moreover, while the usage of O.C. socket on a mini-ITX mainboard is a nice marketing move, it is unlikely that its capabilities will ever be used on this particular model. People who buy mini-ITX platforms want to build small form-factor systems, whereas increasing Vcore north from 1.2V – 1.3V requires rather extreme (and large) cooling solution. But even keeping in mind all the potential weaknesses the X99E-ITX/ac has (there are not a lot of them, though), if you need a high-performance SFF system, this is the motherboard to buy.

MSI is getting ready to launch two budget-oriented AM4 motherboards belonging to the MAG series: …