Chaintech Technology and Colorful Technology this week teamed up again to bring back Chaintech-branded mainboards to the market. The first new Chaintech motherboard in years – the iGame Z97 – will sport massive water-block on its sophisticated 16-phase VRM and core-logic components and will be one of a few E-ATX mainboards based on the Intel Z97 chipset.

Nowadays the market of high-end mainboards is controlled by four companies: Asustek Computer, Asrock, Gigabyte Technology and MicroStar International (MSI). There are smaller makers (EVGA, ECS, Sapphire, Supermicro, Zotac) who reveal interesting products from time to time, but the market is generally commanded by the big four. It is hard to imagine, but some 15 years ago there were more than ten companies producing decent high-end mainboards for performance enthusiasts. Chaintech, a little-known brand today, was one of the legendary names in the late 1990s, mainly for its 6BTM and some other models. Chaintech and Colorful tried to return the brand to the motherboard market in 2012, but without a lot of luck. This time they want to make another attempt by introducing one of the most advanced socket 1150 platforms based on the Intel Z97 core-logic. 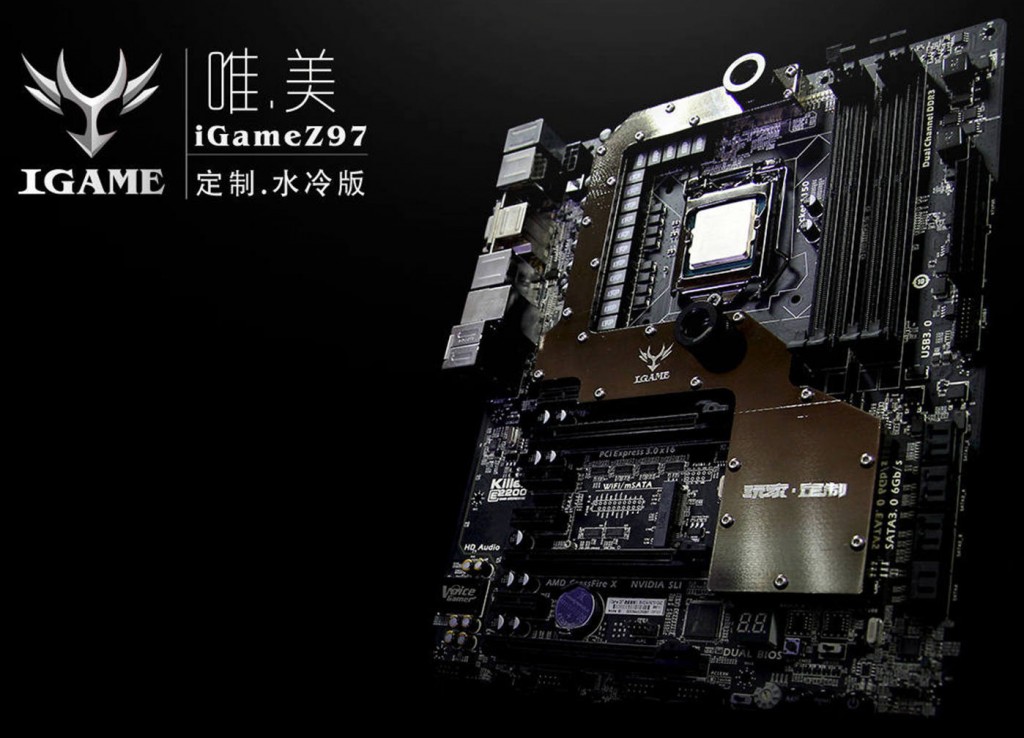 While functionally the Chaintech iGame Z97 hardly impresses (it lacks M.2 slot for high-end SSDs and does not feature integrated 802.11ac Wi-Fi, like the latest solutions from MSI), the mainboard promises be one of the best platforms for Intel Core i5/i7 “Devil’s Canyon” overclocking. The motherboard sports 16-phase voltage regulator module that features monolith super ferrite chokes (SFCs) as well as solid-state capacitors (possibly, Tantalum capacitors), a unique combination of components not found even on on Intel X99-based high-end desktop platforms. The iGame Z97 mainboard also uses aluminum core capacitors with low equivalent series resistors (which mainboard makers call dark/black capacitors) and features 24-pin ATX and 8-pin EPS power connectors for maximum stability. The most notable thing about the iGame Z97 is that it comes with a massive water-block that covers components of VRM and the chipset in a bid to provide ultimate overclocking potential and apply to enthusiasts who use custom liquid cooling systems.

The Chaintech iGame Z97 mainboard is clearly not aimed at the mass market. At the same time, it is hard to imagine that it will become a product of choice for enthusiasts. The latter prefer select models from the big four and EVGA. Usually motherboard makers attract renowned overclockers to demonstrate potential of their platforms. Unless Chaintech and Colorful prove that the iGame Z97 is better than mainboards from the top makers, the motherboard will hardly get popular.

The mainboard is expected to be available in Europe and Asia this year. Pricing will vary, but will likely be very high.

KitGuru Says: Two and a half years ago Chaintech and Colorful did not manage to make Chaintech-branded mainboards popular again, even though they tried to create high-end solutions. It is unclear why they think that addressing the market of extreme enthusiasts makes more sense than making interesting products for the mass market…