MicroStar International has unveiled its all-new Z97 Gaming ACK mini-ITX mainboard that offers a very good balance between performance, technologies and price. The platform is designed for gamers, who want to have a very small form-factor (SFF) high performance system that does not cost too much.

The MSI Z97I Gaming ACK motherboard is powered by Intel Z97 core-logic and supports all – current and upcoming – microprocessors that come in LGA1150 form-factor, including Core i-series, Pentium and Celeron. Whether you plan to use a mainstream Core i5 “Haswell” chip, a high-end Core i7-4790K “Devil’s Canyon” processor or an upcoming Core i7 “Broadwell” central processing units, the MSI Z97I Gaming ACK is compatible with all of them.

The Killer DoubleShot Pro network solution not only automatically classifies and prioritizes the latency-sensitive applications, such as video games, in order to provide lag-free gaming experience, but it can also team Gigabit Ethernet and Wi-Fi in a bid to maximize available bandwidth.

In a bid to ensure sufficient cooling and provide some headroom for overclocking, MSI redesigned the mainboard and located the CPU socket in such a way that it is now possible to install virtually all cooling solutions on this SFF platform, provided that they fit into the chassis. Traditionally, mini-ITX motherboards are not always compatible with the biggest and best cooling solutions. 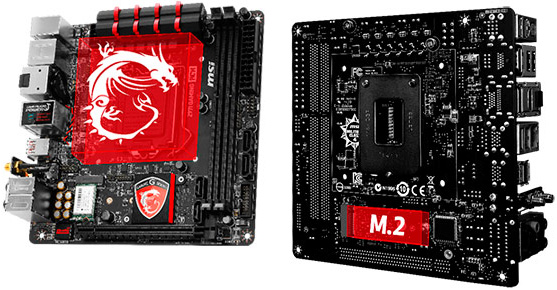 Thanks to compatibility with the latest microprocessors, graphics cards, high-performance solid-state drives in M.2 form-factor as well as on-board high-end network solution, the MSI Z97I Gaming ACK motherboard promises to be a fine base for a powerful small form-factor gaming PC.

Pricing of the mainboard is unknown, but expect it in stores near you in the coming weeks.

KitGuru Says: If you are looking for a mainboard to build a high-performance mini-ITX system, the MSI Z97I Gaming ACK is clearly a worthy candidate. Unlike Asus ROG Maximus VII impact, the solution from MSI does not boast with discrete audio, improved M.2 port (PCIe 2.0 x4, up to 2GB/s of bandwidth) or very high-quality power supply circuitry (including enhanced CPU VRM), but it will certainly not cost you £175/$230 as well.

Previous Rackspace to lower reliance on Intel, set to use OpenPower servers
Next Marvell and Nvidia are working on processor modules for Project Ara smartphones