Supermicro, a leading manufacturer of high-end mainboards for workstations and servers, has revealed its first motherboard based on Intel Corp.’s X99 core-logic. The new platform not only supports Intel’s latest Core i7 Extreme and Xeon processors and overclocking capabilities, but can be equipped with USB 3.1 ports with 10Gb/s bandwidth.

One of the key selling points of the Supermicro C7X99-OCE-F (in addition to very high build quality and reliability) is upgradeability of four USB 3.0 ports to USB 3.1 ports with 10Gb/s bandwidth using special host controllers. At present this is a BOM option for OEMs, but in a couple of months’ time Supermicro may release a new version of the mainboard with USB 3.1 type-C connectors for the channel market. 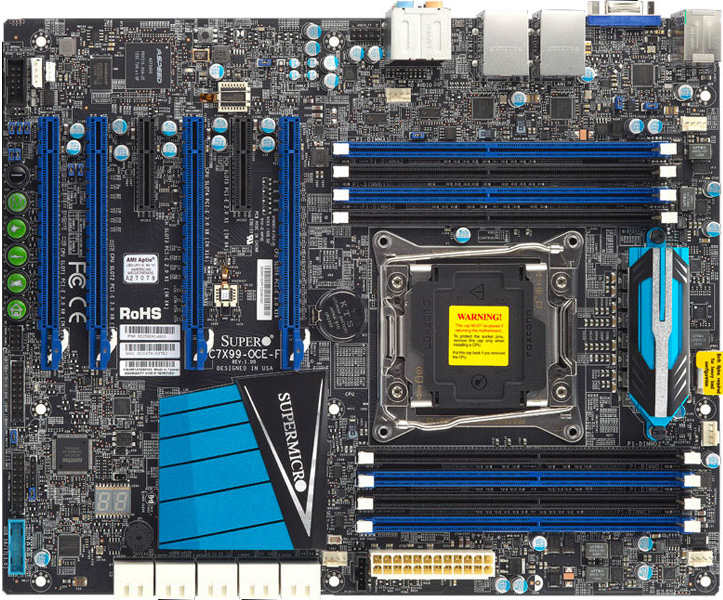 Unlike the majority of Intel X99 motherboards from other manufacturers, the Supermicro C7X99-OCE-F does not feature extreme overclocking capabilities since it is aimed at desktop, server and workstation markets. Still, it can overclock microprocessors in both automatic and manual modes.

The new mainboard will hit the market shortly. Pricing is unknown, but traditionally SuperMicro motherboard are considerably more expensive than competing solutions due to positioning for servers and workstations.

KitGuru Says: Systems powered by the C7X99-OCE-F will be among the first PCs on the market with USB 3.1 10Gb/s ports. While you will not be able to buy a version of the C7X99-OCE-F with USB 3.1 type-C connectors just now (still, some of such platforms will probably slip to the channel market), it is very pleasant to see that the new version of USB is making progress in terms of the adoption. If you are looking for a high-quality platform for a workstation or a gaming PC and have no plans for heavy overclock, then the Supermicro C7X99-OCE-F should be considered.