Gigabyte has lifted the lid on its new X299X motherboards for Intel’s new Cascade Lake-X HEDT processors. Some of these were hinted at in prior leaks but now, we have the full reveal, with the Designare 10G, Aorus Xtreme WaterForce and Aorus Master boards hitting the market.

The trio of new motherboards will be sporting the X299X logo, but the design actually uses the previous X299 chipset, which has been around for two years now. The addition of the X suffix at the end simply implies the motherboards are specifically built for the new Cascade Lake-X CPUs with new power delivery solutions to ensure the best performance.

All three motherboards in the range are designed with productivity and content creation in mind, boasting 16-phase power delivery systems. Server-grade components are integrated in the motherboard, along with quad-channel DDR4 memory with eight slots available and support for up to 256GB of RAM. As you would expect, the platform will support multi-GPU configurations and Gigabyte's motherboards have already been validated for Nvidia Quadro graphics cards. 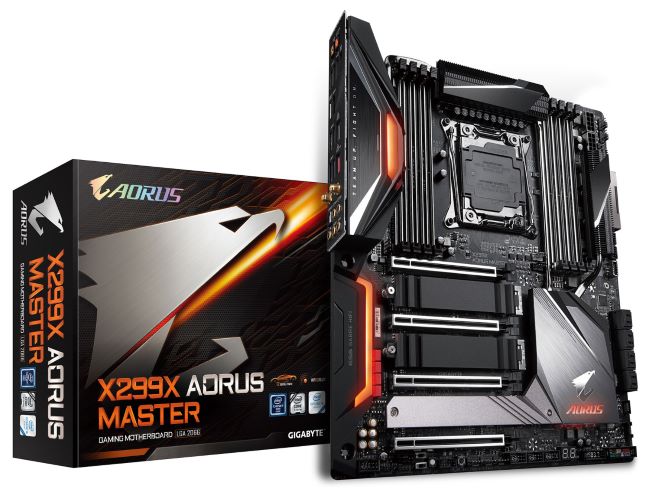 Both the Designare 10G and X299X Aorus Xtreme WaterForce have built-in Thunderbolt 3 support with a pair of USB Type-C ports supporting 40 Gbps bandwidth. All the Gigabyte X299X motherboards are equipped with PCIe x4 M.2 slots with lanes provided from the chipset. Users can use an Intel Optane module to create a VROC disk array.

Gigabyte has implemented its excellent thermal dissipation design, including their Fins-Array heatsink which has proven to work very well on other platforms such as Z390 and X570. The Aorus WaterForce Xtreme features a water block that covers the processor, power delivery subsystem, chipset and M.2 SSD drives.

The trio of new motherboards should be available soon, as Intel announced that Cascade Lake-X CPUs will begin shipping in November. We expect the X299X motherboards to be available at the same time, although we don't have pricing information at this point in time.

KitGuru Says: Gigabyte has set out its stall early with an impressive looking set of X299X motherboards. With Cascade Lake-X due next month, we will surely be seeing plenty of other new motherboards from various manufacturers soon.