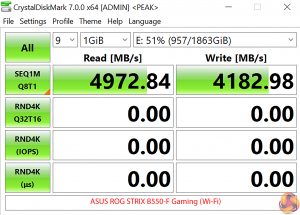 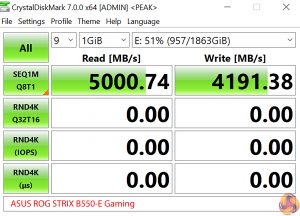 Full speed M.2 performance is easily obtained from the CPU-connected Gen 4 x4 slot. Of course, running any SSD through the chipset-connected M.2 slot will result in lower maximum transfer rates and the introduction of bandwidth headaches through the CPU-to-chipset link speed.

Thermal performance from the aluminium M.2 heatsinks was superior to the alternative design used by Gigabyte. The ASUS boards kept our heavily pushed SSD close to 50C and showed no signs of allowing the drive to go near its thermal throttling temperature. 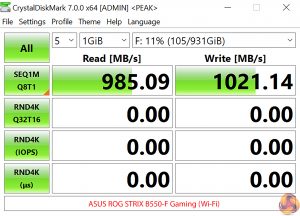 As the B550-E Gaming does not have any chipset-fed ports on the rear IO, we could not test its speed capability. This is because there is a bug with our Sabrent SSD enclosure and the AMD Ryzen CPU-fed 10Gbps USB ports that is present on ALL vendors’ motherboards.

This is not ASUS’ fault and looks to be a Sabrent/AMD problem. It is certainly worth noting, however. 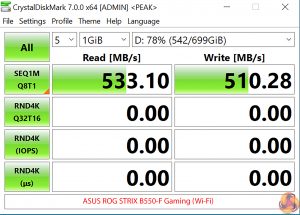 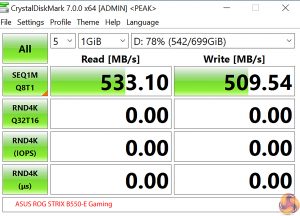 SATA performance is as we would expect from the chipset-fed ports. 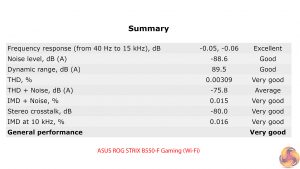 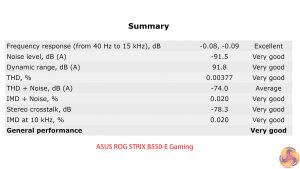 Both motherboards get ‘Very Good’ overall ratings from Rightmark Audio Analyzer for their SupremeFX-based solutions.