The fan control abilities within AI Suite 3 are similar to those found within the UEFI. One of the key differences here is the ability to tie fan speed curves to positions within one’s system build, which is especially useful if you have a large number of fans.

You also get the flexibility of being able to manually tune the fan speeds and their curve whilst the system is in operation. It is good that you do not have to jump back into the UEFI if your current system usage switches from simple Word document typing to more demanding video editing or gaming, for example.

GameFirst V can be used to prioritise network traffic in a similar fashion to Killer’s Network Manager software, but whilst using a non-Killer NIC. For example, higher priority can be set to Steam or a game than a web browser in order to prioritise traffic and minimise lag during gameplay. 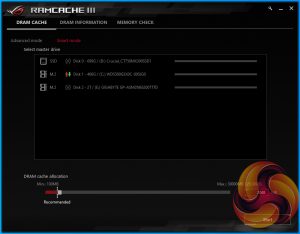 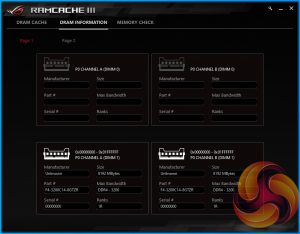 RAMCache III uses free system memory to act as a read/write cache on top of a storage drive (including NVMe SSD) that allows for faster access to frequently used data. This can have a benefit of speeding up frequently accessed programs. This is a smart tool which makes use of a user-determined amount of system memory that would otherwise be sat idle.

ASUS’ AURA RGB tool is a very comprehensive piece of software used for managing the colours and operating parameters of onboard and connected LEDs. LED operating modes can be synchronised with other compatible hardware or managed for the motherboard alone.

I particularly like the CPU temperature mode that changes the light colour based on processor thermals. The thresholds can be adjusted so that green stays present for longer or red is activated quicker. It was, however, noticeable how slow the LED colour would change when a load was applied. This is due to the lag in temperature readings through AI Suite 3 (the software tool that is used to drive AURA‘s temperature readings).

Integration with Philips Hue lighting is a particularly useful feature within AURA.