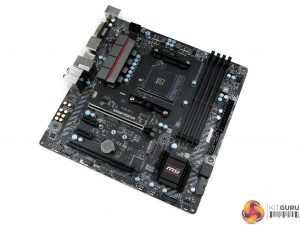 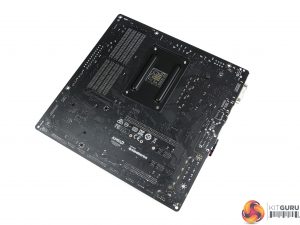 The MSI B350M Mortar uses black and grey styling that is practically identical to that observed with the B350 Tomahawk. A dark black PCB is good to see on a low-cost motherboard as the ugly brown alternative option can quickly ruin the appearance of a build.

MSI only chose to use one heatsink for the power delivery system. The SOC VRM phases are left un-cooled. Thankfully, the single heatsink covering the CPU-driving MOSFETs uses a screw-in mounting solution rather than the weak push-pin alternative. 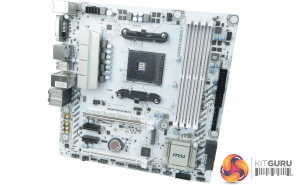 The two distinct colour options use the exact same physical hardware and will perform identically. They are simply varied colour options for the same motherboard. 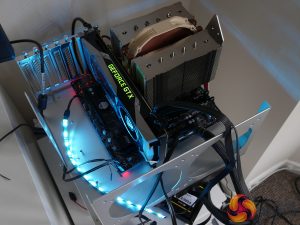 Onboard lighting for the motherboard is intentionally coloured red. This colour cannot be changed in the software but it can be set to operate in a different mode or turned off completely. The Arctic model uses a white LED system, rather than red, in order to fit with its wider styling approach.

MSI supports 4-pin RGB strips but it is somewhat misleading for the company to claim ‘RGB’ capability. A connected 4-pin LED strip can only be set to operate using one of MSI’s seven pre-determined colour options. There’s no real RGB control that allows a user to customise the LED colour with granular control over the 16.7 million colour options.

You basically get an LED strip connector that can be set to one of seven colours rather than true, customisable RGB mode.

While the limited lighting potential on the B350 Tomahawk was highly disappointing, it represents more of an issue for the micro-ATX Mortar. An ATX build gives additional space to add accessories such as external RGB lighting controllers (NZXT’s Hue+ springs to mind). In the more space-constrained micro-ATX environment, added space for such accessories is at a premium so emphasis is shifted further towards features native to the motherboard. 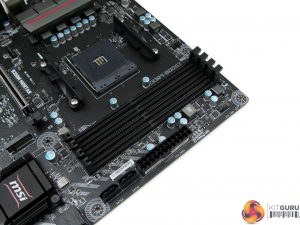 Four single-latch DIMM slots support up to 64GB of DDR4 memory. MSI quotes support for 3200MHz memory kits but this will depend on the individual memory dies used and the stability of the motherboard BIOS. Interestingly, MSI’s product page lists support for ECC UDIMM memory albeit in non-ECC mode.

A slight negative of the DIMM slots is the single colour. Some novice users may not understand which slots should be used with a two-module kit for dual-channel operation. While MSI tried to make this clear with text on the motherboard PCB, competing vendors’ solutions of using two different colours are better approaches. 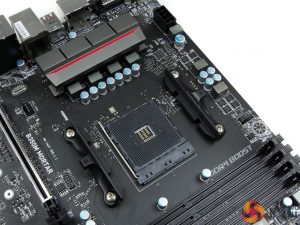 MSI uses a 4+2 phase power delivery system to feed the AM4 CPU and its accompanying components such as the SOC voltage rail and (probably) iGPU for upcoming APUs.

This is a decent enough power delivery solution for a cost-effective, overclockable AM4 motherboard. The primary MOSFETs are the same type used on MSI’s £300 flagship X370 XPower Gaming Titanium motherboard. That point can be interpreted as a good thing for the B350 options or a bad thing for the £300 XPower.

One area of differentiation is the cooling applied to the power delivery system. MSI decided that the two SOC phases do not require a heatsink. This is probably fine, even for long-term usage, but lower operating temperature can generally aid component longevity so we would have preferred to see even a small block of aluminium put on top of the electronics. A small heatsink is not difficult to fit into the budget on a roughly £90 motherboard. 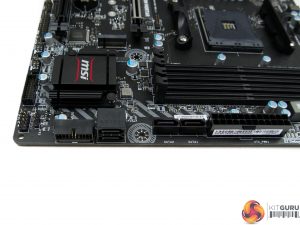 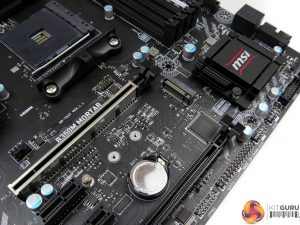 MSI deploys four SATA 6Gbps ports on the B350M Mortar, rather than the six that we generally find on competing solutions. While four ports is likely to be enough for most users, it is certainly more limiting than its needs to be. Two additional ports could have easily been split from the M.2 PCIe/SATA 6Gbps connection switch on the AM4 CPUs. This is more of an issue on a Micro-ATX motherboard where PCIe expansion is at a greater premium than on ATX.

Two 5Gbps internal USB 3.0 headers are provided, one of which sits on the edge of the board in a right-angled mount. This is an ideal solution by MSI as the right-angled port can ease management of the thick USB 3.0 cable, while space-constrained cases can use the outwards-facing alternative if there are interference issues.

M.2 32Gbps PCIe 3.0 x4 NVMe SSDs as well as SATA 6Gbps-based alternatives are supported on the single M.2 connector. MSI does not include its M.2 Shield cover with this motherboard. Positioning the M.2 slot below the primary graphics card means that it will receive incidental airflow from an open air heatsink found on many board partner graphics cards. It also means that an ugly green PCB on an M.2 SSD will be hidden.

No U.2 is not an issue on a motherboard of this calibre and the same can be said for the practically dead SATA-Express connection. 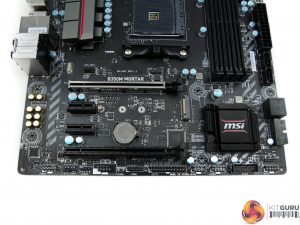 All sixteen of a Ryzen CPU’s PCIe 3.0 lanes are delivered to the steel-reinforced full-length expansion slot. This is the only slot that you should install a graphics card in as the other full-length slot is limited to PCIe 2.0 x4 bandwidth through the B350 chipset.

MSI’s slot positioning is likely to be ideal for most users. A graphics card in the top slot will cover the PCIe 2.0 x1 below it. That’s not a problem as the upper PCIe 2.0 x1 slot is disabled when the lower one is in use. Even with a 2.5- or 3-slot graphics card, the PCIe 2.0 x4 expansion slot and the M.2 connector are still usable simultaneously, without bandwidth restrictions.

As a note, we had no problems installing the large Noctua NH-D15 CPU cooler next to a GTX 1080 Ti Founders Edition graphics card in the top slot. Clearance between the two was in the region of millimetres and the graphics card backplate certainly gave peace of mind against electrical shorting from the CPU cooler’s metal fan clips touching against the video card PCB. The pair worked without issues throughout our testing. 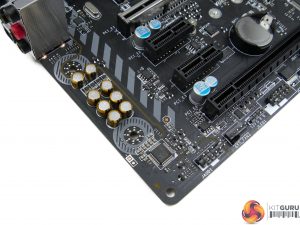 As is common for many sub-£100 B350 motherboards, Realtek’s ageing ALC892 codec is used as heart of the audio system. A sizeable quantity of Nippon audio capacitors aid the solution. The same can be said for segregated PCB traces which aim to minimise signal interference. 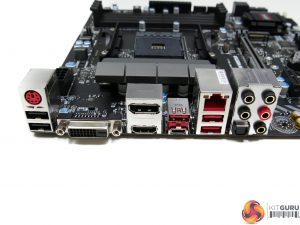 Rear IO for the B350M Mortar is largely identical to the ATX B350 Tomahawk. A total of five USB Type-A ports is found on the rear IO, alongside one Type-C port provided by the ASMedia ASM1543 logic controller. Two of the ports are USB 2.0 and should serve for peripheral duties alongside the PS/2 connector. The remaining four USB ports (three Type-A and one Type-C) all run at 5Gbps USB 3.0 bandwidth.

A couple more USB Type-A ports would have boosted connectivity options but having five in total is reasonable enough. Despite being common for this price point, the lack of 10Gbps USB 3.1 Gen 2 is disappointing. ASRock and ASUS are in the same boat with no 10Gbps USB 3.1 Gen 2 connectivity, but Gigabyte’s competitors offer the fast connection by leveraging the full B350 feature set.

DVI-D, HDMI 1.4, and DisplayPort form the rear IO video outputs. Resolutions up to 1920×1200 at 60Hz are supported on the single-link DVI-D port, while HDMI offers 4K at a low refresh rate or lower resolutions (such as 1080P) at 60Hz. 4K60 capability is provided by the DisplayPort connector and MSI deserves credit for including this highly-capable port. These ports are only useable with an AM4-based APU, not a Ryzen processor.

Gigabit Ethernet is provided by the Realtek 8111H chipset that is a cheaper alternative to Intel and Killer NICs found on more expensive motherboards. MSI provides ample 3.5mm audio jacks, rather than the cut-down selection seen on many competing offerings. Optical SPDIF is also provided, which is ideal for surround sound gamers. 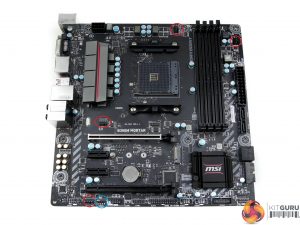 Four 4-pin fan headers are distributed around the motherboard, three of which are within reach of the CPU socket. All of the headers feature DC and PWM fan control capability, which is ideal for users trying to fine-tune their system cooling characteristics. Nuvoton’s NCT6795D-M chipset is tasked with monitoring and control duties.

The single 4-pin RGB header is located in the board’s bottom-left. Given the small dimensions of micro-ATX cases, this location is less likely to cause significant routing issues with an LED strip than on larger ATX counterparts. With that said, it would have still been useful for MSI to include an RGB extension cable with the accessory bundle.