It is worth noting that MSI’s Click BIOS 5 UEFI is particularly reliant upon mouse usage within the interface. This could cause headaches for users with incompatible mice or ones that connect via Bluetooth, for example. That’s something that is most certainly worth bearing in mind. 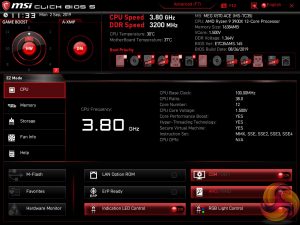 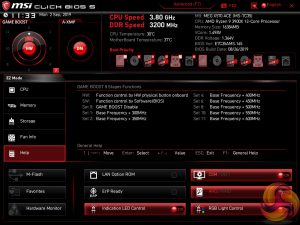 MSI’s version of EZ Mode is as good as we see from competing motherboard vendors as it features plenty of options but does not overcrowd the screen and remove the ease-of-use aspect. Buttons for simple A-XMP and Game Boost overclocking activation are smart moves, though we’re not sure how many people will use the latter given the ease and limitations of overclocking Ryzen 3000.

Game Boost is MSI’s pre-determined overclocking mode which offers frequency adjustments for Ryzen CPUs. These are far less fine-tuned than manual overclocking, though, as they are designed to work with a variety of chips rather than your own specific silicon. The Help section highlights the frequency offset for each Game Boost setting. 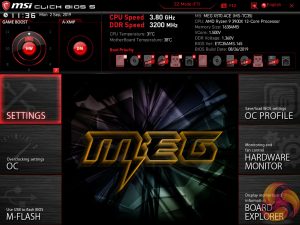 The OC section is, as expected, full of settings relating to overclocking. MSI smartly includes a Normal or Expert selection mode that is useful for those trying to learn about overclocking who do not want to risk adjusting irrelevant settings.

There are plenty of options relating to voltage, frequency, and settings adjustments and all are generally easy to find. Being critical, the layout could be a little more segregated to reduce the amount of information on the single primary page.

MSI’s load-line calibration (LLC) settings are clear and functional, which cannot be said for the system deployed by some competing solutions. Nine different options can be selected and MSI smartly uses a simple graph to show how the voltage changes based on load. Simple, yet functional. It certainly aided the simplicity of our overclocking attempts.

Options are also allocated for memory. High dividers can be selected, and MSI includes a multitude of aggressive preset overclocks. Further memory-based presets are included which are even more aggressive in the way they tune the system; Memory Try It! settings such as DDR4-5000 with FCLK adjustment are present.

Lots of the AMD-specific overclocking options are buried within the Settings section. This is a little difficult to navigate towards. However, most of the necessary overclocking settings can be accessed via the dedicated OC page. 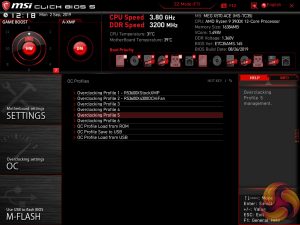 Up to six individual settings profiles can be saved to the board and more can be transferred using storage mediums. 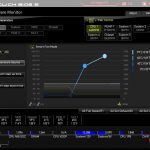 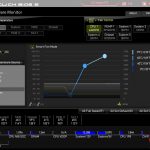 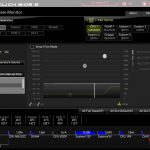 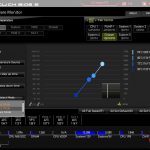 A 4-point curve can be used to adjust the fan speed profile based on temperature readings from several sources including the CPU, M.2 slot, and MOSFETs. Fan speed adjustments take place in real time which is ideal for tuning the system noise output more efficiently.

The chipset fan is PWM-based and features the same 4-point control curve. Alongside this curve are operating presets for Silent Mode, Balance Mode, and Boost Mode.

The ability to run fans at 0% up to a user-defined temperature level is a strength for MSI and speed hysteresis control is good to have. I like the written information that MSI displays alongside the graph, such as exact fan speed percentages and temperatures for each marker. 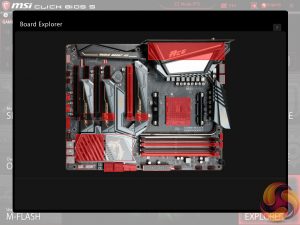 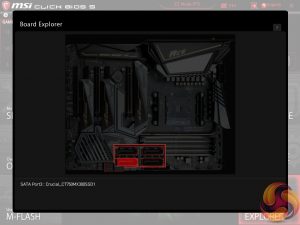 Board Explorer is a visual interpretation of the motherboard and its connected devices. This is a valuable tool to use for troubleshooting or ensuring that components are connected to the correct port at the correct speed. 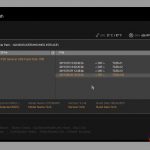 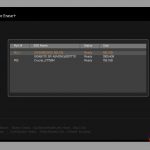 Secure Erase can be used to securely wipe (not just format) an SSD with great ease which can be good if selling it on or aiming to restore performance from a ‘dirty’ drive.

MSI’s Click BIOS 5 UEFI is a great offering without any glaring weaknesses. The EZ Mode page is good, ease of navigation is high despite the crowded OC page, and tools such as Secure Erase and Board Explorer sweeten the deal. Visual interpretation of the LLC settings aided overclocking simplicity.

Manual fan control is good and I particularly liked the ability to use an M.2 slot as one of the temperature sources. Control for the chipset fan is also strong. Save slots for six system profiles is enough.

There is no RGB LED control mechanism within the UEFI, though that’s not particularly uncommon in today’s market. The heavy reliance upon mouse usage within MSI’s UEFI is worth noting if you have a device that may not be compatible.

Previous Win a PC game of your choice this weekend! (closed)
Next IFA 2019: LEO checks out new drives from Western Digital and SanDisk 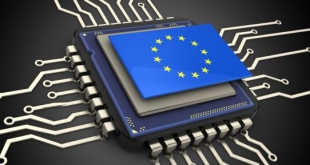 The European Union prepares its own prototype CPU

As the UK prepares to officially leave the European Union this Friday (31st January), the …