Arguably the most critical mainstay behind the inter-connectivity of modern technology devices is the Universal Serial Bus, or USB for short. The connection provides opportunity for an almost limitless level of connectivity that has redefined the way in which we use computing devices. So what does it take to make something as well-defined as USB even better? In the words of a famous car program presenter; “Speed and Power!”

And that's where USB 3.1 comes in. A 10Gbps link speed, up to 100W of power delivery, and upcoming widespread application of a new Type-C connector are some of the key features that the new version will usher in. 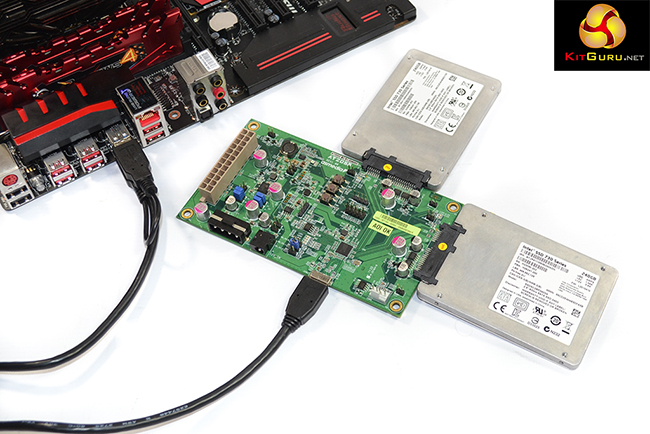 The latest version of USB is actually a little different to previous iterations of the connection, though it's still backwards compatible. Rated for 10Gbps (1.25GBps), moving from USB 3.0 to 3.1 provides ‘only‘ twice the connection speed of its predecessor – a far cry from the factor of ten increase we saw when moving to USB 3.0 from 2.0. In that sense, the ‘.1' designation is more fitting than an entirely new up-issue.

There's more than just raw speed to the new version's data transfer mechanism. USB 3.1 makes use of a 128b/132b encoding scheme which is similar to the 128b/130b process used by PCIe 3.0, albeit with an extra 2 bits of error prevention. That limits the USB 3.1 data encoding overhead to a mere 3%, rather than the 20% loss figure applied to USB 3.0 and its 8b/10b encoding scheme. Although that's not to say that USB 3.1 will be free of significant speed-capping overheads elsewhere.

Though don't expect to charge your shiny new USB 3.1 laptop off a motherboard's USB 3.1 port in the short-term future. There are significant engineering issues related to feeding a 5A current through a 20V line on a motherboard PCB. Ignoring the requirements for additional ICs and beefy power circuitry, there's also the system power supply issue, with no voltage rails running as high as 20V on a typical ATX PSU.

Transferring 100W of power over a USB cable has been possible since the USB Power Delivery v1.0 specification was announced more than two years ago. Yet we haven't seen any devices making use of the extra power supply in the consumer marketplace (please correct me if I am wrong). More on that point shortly.

So even though the power capability for USB 3.1 is strong, as is the case for USB 3.0, that does not necessarily mean that all ports will be fed a 100W supply. The standard power specification is still 900mA at 5V (4.5W), and there's also the slight increase to 7.5W for charging ports.

The above sketch does, however, show an environment where enhanced power delivery over USB could be put to good use. In this occurrence, the monitor is being used as a power hub for the other devices connected to it via USB, and of course there's the data delivery capability for good measure.

USB 3.1 will initially be rolled out on motherboards in the Type-A port that we are all familiar with, as well as the recently-announced Type-C reversible connector. The latter will be shipped out by MSI next month on its Z97A Gaming 6 motherboard. We expect USB 3.1 Type-A to be seen on motherboards from MSI and its competitors in a similar time-frame. 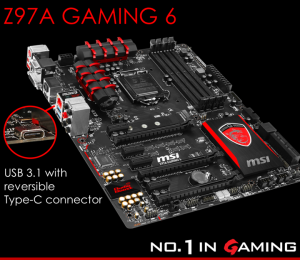 As well as a 10Gbps data link, and up to 100W of power delivery, the Type-C connector will also feature a DisplayPort mode, allowing for the transfer of video signal. This trio of functions is very similar to what we have seen from Thunderbolt.

Now the possibility for up to 100W of power delivery becomes more important. With video, data, and power all combined onto a single cable, the ability to use one-cable links between multiple computers and a monitor shows feasibility. This could be ideal for laptop and NUC-style system users; feed your video, data, and power over USB 3.1 Type-C and having everything else running wirelessly.

At the risk of running a little far into the future with my imagination here, the ability to charge your laptop, play music, and provide a video link for satellite navigation all over a car's high-voltage USB port would be impressive. In the shorter-term future, external graphics cards utilising the USB 3.1 connection could be an upcoming reality. 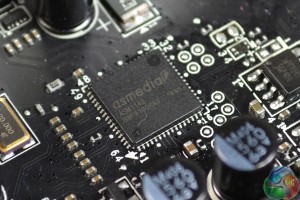 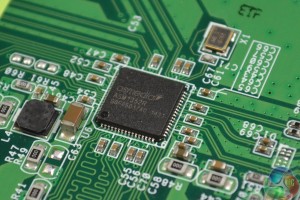 The two USB 3.1 ports on MSI's X99A Gaming 9 ACK motherboard are provided by ASMedia's ASM1142 host chipset. The chipset takes two PCIe 2.0 lanes from the X99 PCH and converts them into the pair of USB 3.1 ports.

The maths says that two chipset PCIe 2.0 lanes provide 10Gbps of bandwidth, minus a 2Gbps overhead. So, for this early engineering sample, the realistic throughput it limited to below 8Gbps (1GBps) for the two USB 3.1 ports combined. But we must emphasise that this is an early engineering sample solution, and the upcoming implementations are highly likely to mature with future chipset connectivity (with reports suggesting Intel may provide PCIe 3.0 lanes on their 10-series chipsets).

On the test board side, ASMedia's ASM1352R controller links the USB 3.1 data connection to the accompanying RAID array formed of SATA 6Gbps SSDs. We expect similar USB 3.1-to-SATA chipsets to start showing up in external drive enclosures over the coming months (around the time of Computex would be a safe bet).

As the first pieces of USB 3.1 kit start rolling out, it is also fair to suggest that ASMedia's competitors (VIA Labs, Renesas, Etron Technology, etc.) will start showing off their USB 3.1 chipsets. Unfortunately, USB 3.1 incorporation into Intel's chipset does not look anywhere near as positive, with recent suggestions pointing out a lack of native support from the 100-series chipset.