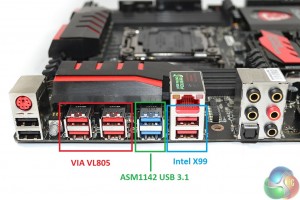 MSI’s X99A Gaming 9 ACK features four different sets of USB ports on its rear IO. There are two USB 2.0 and two USB 3.0 ports directly from the Intel X99 PCH. Four USB 3.0 ports are provided by a VIA VL805 PCIe-to-USB 3.0 controller which uses a single 5Gbps PCIe 2.0 lane from the X99 chipset. Finally, there are the two ASMedia ASM1142-powered USB 3.1 ports.

The three different connections give us the ability to compare the USB 3.1 ports’ performance against the Intel chipset’s options and those provided by a different add-on controller. 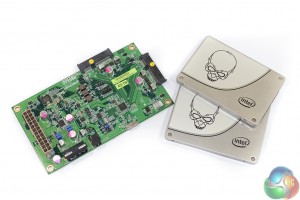 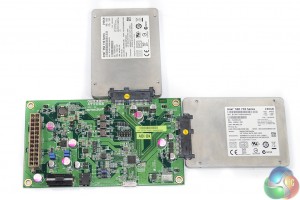 With a theoretical speed capability of 1.25GBps (1GBps in the current configuration), a pair of RAID 0 SSDs is required to outline the performance of USB 3.1. Two of Intel’s 240GB 730 SSDs are combined. According to our own testing, the Intel 730 SSDs in RAID 0 should be capable of around 1000MBps read and 570MBps write. 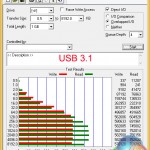 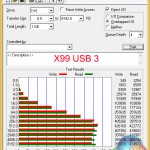 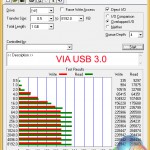 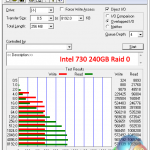 As referenced by the fourth screenshot taken from the respective review, the displayed write potential of USB 3.1 is truncated by the performance limitations of two Intel 730 SSDs in RAID 0. That alone speaks volumes for the speed capability of MSI and ASMedia’s USB 3.1 implementation. The SATA RAID screenshot also shows that the current USB 3.1 solution is still a distance from the 1GBps capability of the drives. Other connection overheads and solution immaturity (this is a pre-release configuration) are likely candidates for the ~300MBps shortfall.

It is worth pointing out that you do not need to rely upon Windows 8.1 to take full advantage of the ASM1142 USB 3.1 controller’s speed (or VIA’s for that matter). While Windows 8.1’s built-in driver support for Intel USB 3.0 ports sees a performance advantage over Windows 7 for that solution, the ASMedia USB 3.1 chipset operates at almost identical speeds on both operating systems. 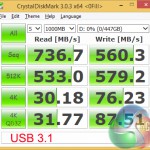 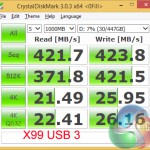 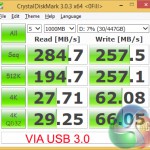 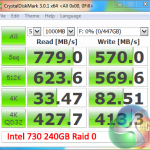 The incompressible data test in CrystalDiskMark shows an analogous trend with similar performance hierarchies to the ATTO test. USB 3.1 again proves that it has no problem stretching to more than 730MBps when reading from the RAID 0 SSDs.

As shown by the comparison between the USB 3.1 and Intel 730 RAID 0 (SATA) screenshots, a large proportion of the 4K transfer performance is retained over USB 3.1. That’s a positive for users who regularly transfer large amounts data that is varied in size and type. The 4K QD32 performance plummets compared to SATA, although USB 3.1 still shows greater capability than its USB 3.0 predecessors.

Note: Both sets of the 4K read and write results for Intel’s X99 USB 3.0 ports should be interpreted with caution. There was a large discrepancy between the ~26MBps write result repeatedly shown on Windows 8.1 and the ~70MBps figure achieved using Windows 7. The 4K read speeds were also closer to the competition and the 30MBps mark in Windows 7. 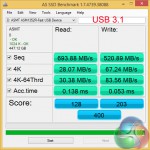 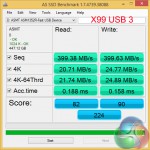 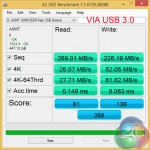 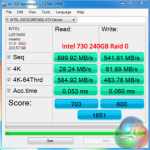 Focussing on the 4K performance results, USB 3.1 still shows significant improvements over both USB 3.0 solutions. While slight improvements may be generated by USB 3.1 for smaller data workloads, it is sequential performance where USB 3.1 truly shines. Large file copies will benefit significantly from the 10Gbps link speed.

Note: The Intel X99 USB 3.0 ports were actually achieving ~26MBps 4K read and ~58MBps 4K write speeds using Windows 7, which is closer to the USB 3.1 performance and better than what the VIA VL805 controller can offer. There seems to be a glitch somewhere in the test system that is hampering the performance of Intel’s USB 3.0 ports on Windows 8.1 (although on this development kit with early software drivers, that issue could lie in a number of places and is likely to be non-existent when the hardware reaches market). 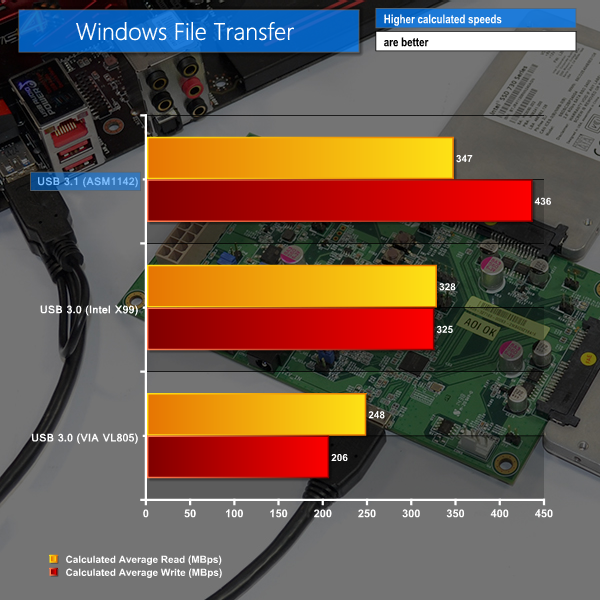 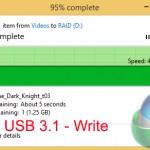 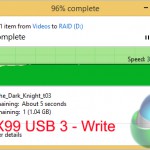 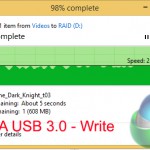 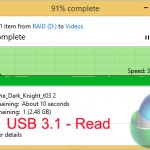 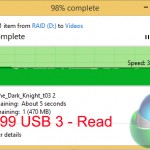 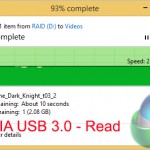 Firstly we need to point out that our test system’s SSD is rated for 500MBps read and 330MBps write when transferring incompressible data. Due to a tight turnaround schedule with the USB 3.1 hardware, we were not able to fully test transfer rates using a storage drive that was better able to keep pace with the Intel SSDs.

Taking significant advantage of our test SSD’s high read speeds, the USB 3.1 connection allowed our 29.8GB video file to be written to the Intel RAID drive in just 70 seconds. That translates into an average speed of 436MBps, which is 111MBps (34%) quicker than the X99 USB 3.0 port’s result. Read speeds from the USB 3.1 drive were clearly limited by our SSD’s write performance, hence the performance lead over Intel’s X99 USB 3.0 ports was closed.