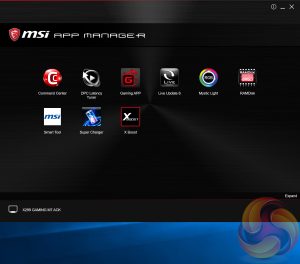 MSI has made a wise move for its software portfolio by introducing the MSI “App Manager”. It seems new and it is a sensible idea – have a single application that pulls together MSI’s wide range of optional motherboard utilities. Gigabyte has long done something similar with its “APP Center” software and now that MSI has joined in on the action we’d be surprised if ASRock and ASUS didn’t follow suit. 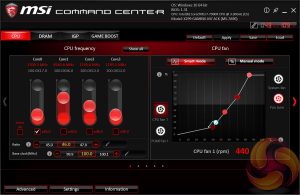 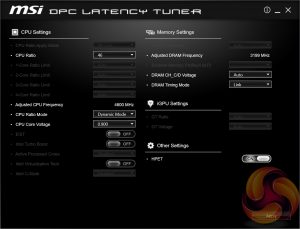 Command Center is the Windows performance tuning software for the MSI X299 Gaming M7 ACK housing on-the-fly overclocking tools for the the CPU, DRAM and iGPU and fan controls. The virtual Game Boost button can also be toggled from within here but we find for the effort required users are better off doing some quick research to overclock their CPU since MSI has to overestimate the voltage to account for variations across all CPUs which usually results in considerably more voltage than is necessary being applied. 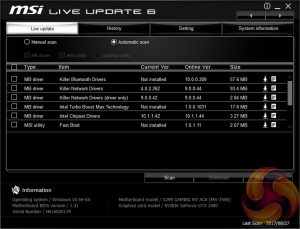 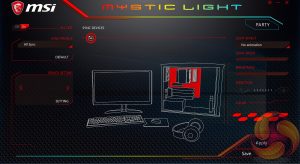 MSI Mystic Light is the primary LED controlling functionality but it left us underwhelmed for the high-end motherboard this is. The user cannot set each of the single lighting modes (breathing, flashing, etc.) to display more than 1 colour at a time – 1 colour per mode so having multi-coloured lighting effects like a “rainbow” effect appears to be out of the question. The range of colours is impressive enough as you can specify colours on an RGB scale but the variety of pre-configured lighting modes and lighting displays is decidedly average. 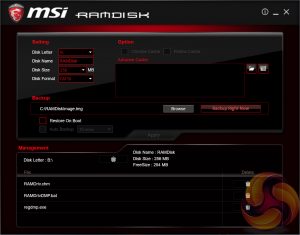 RAMDisk could well be a useful utility on a platform like X299 where up to 128GB of RAM is supportable making RAM Disks of genuinely useful capacities possible. We didn’t have the opportunity to extensively test it but it was easy enough to set up a 4GB RAM Disk and use it to cache an instance of Google Chrome. Given the already fast SSD being used for the operating system drive it was hard to discern a significant performance difference but your mileage may vary. 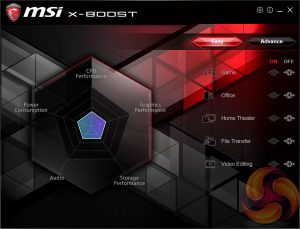 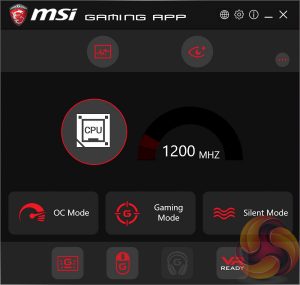 The whole situation with MSI motherboard software is nothing short of baffling with four applications (X-Boost, Gaming App, DPC Latency Tuner, Command Center) tasked with system performance and tuning functions of some description.