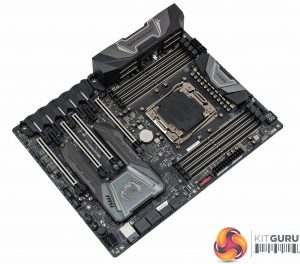 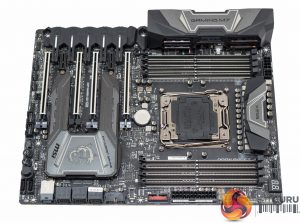 MSI continues from Z270 with a neutral colour scheme for the X299 Gaming M7 ACK which is an eminently sensible choice given the general direction of travel for the DIY PC market. A full black PCB with silver and grey accents offers the perfect blank canvas on which to “paint” with customisable RGB LEDs that span the PCIe lanes, chipset heatsink, CPU VRM heatsink and rear I/O shield.

Given MSI’s design strategy in the motherboard market it still comes as something of a surprise that MSI’s GTX 1080 Ti Gaming X graphics card, which MSI fans would realistically pair with this motherboard, is constrained by a tiresome red and black colour schema.

The most striking of this motherboard’s design elements is easily the M.2 Shield Frozr, shaped like a spaceship out of a Sci-Fi film. This sizeable motherboard heatsink provides heat dispersion for up to two M.2 drives and the PCH.

MSI provides both a debug code reader and LED sequence debug lights. Interestingly, there’s a sequence of debug LED lights for the various components of the CPU (Core,  I/O, System Agent, Ring, etc.) which is a unique and helpful troubleshooting feature for overclocking experimentation.

I/O provided along the edge of the motherboard includes dual USB 3.0 headers, eight SATA III 6Gbps, U.2 and a USB 3.1 front panel header.

Running along the foot of the motherboard is a range of OC buttons (power, reset and GameBoost), a dual BIOS DIP switch, three fan headers, some USB 2.0 headers and other assorted headers and jumpers. 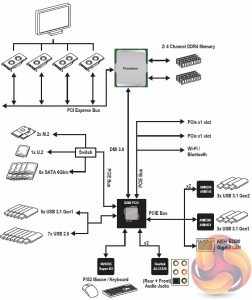 MSI provides four PCIe 3.0 x16 slots with two PCIe 3.0 x1 slots sharing their space with the dual M.2 ports. Those four PCIe 3.0 x16 slots support “only” a 3-way graphics configuration and contribute to an incredibly complex bandwidth allocation balancing act across the motherboard that will vary depending on whether the CPU is a 44- or 28-lane Skylake-X or 16-lane Kaby Lake-X unit. 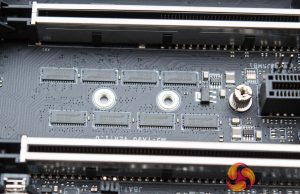 A number of ASMedia ASM1480 chips sit in between those PCIe lanes taking responsibility for switching PCIe bandwidth between lanes depending on the chosen hardware configuration. 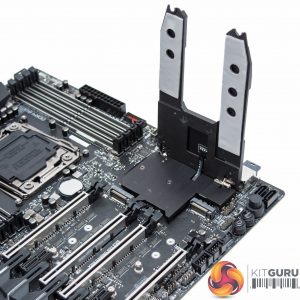 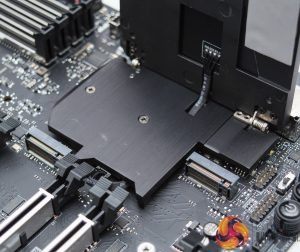 The party piece with MSI’s X299 Gaming M7 ACK is easily the M.2 Shield Frozr which opens up vertically to reveal two M.2 slots that sit directly underneath. The purpose of the M.2 Shield Frozr, according to MSI’s packaging, is to “delay throttling” but your mileage will vary depending on ambient airflow environment and the total heat output in that region of the motherboard. 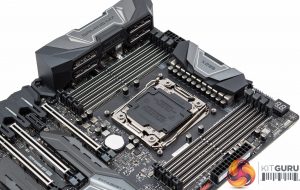 MSI provides only one CPU fan header with a water pump header meaning dual fan radiators either have to use the SYS fan header next to the water pump for the second fan or one of the three system fan headers at the foot of the motherboard. Of course, integrated fan controllers are now available on most AIO liquid coolers so this shouldn’t be a deal-breaking concern. A fan splitter cable is also an option.

The heatsink that covers the CPU VRM is a rather compact offering since space constraints for Intel’s LGA 2066 socket and DIMM slots dictate the maximum extent of the cooling solution. There have been industry grumblings about the longevity of some X299 VRM solutions but given how well-engineered this motherboard power circuitry is even a heavily overclocked i9 7900X fails to work the VRM significantly hard. Perhaps LN2 workloads or Intel’s 14, 16 and 18-core CPUs will tell a different tale. 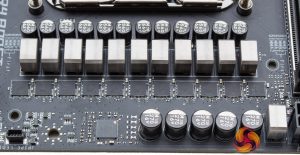 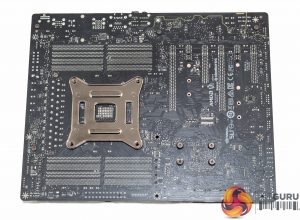 Underneath the motherboard we’re pleased to see only the use of cross-head screws and no push-pins which makes heatsink removal and maintenance an easy task.

The rear I/O is well covered by connectivity as well as features with a USB flashback port, clear CMOS button and BIOS flashback button. The full range of I/O is as follows: