Noveto has announced it is releasing the first part of a revolutionary new audio Chipset, Noveto Smart Audio is the world’s first dynamic focused audio solution that delivers precisely generated sounds direct to the users’ ears.

The release marks a milestone in the company’s engineering phase as it aims for mass production by 2021. The technology is planned to be either embedded in third-party devices or available as a stand-alone peripheral such as a soundbar. Noveto has partnered with Foxconn who will be a key player in bringing the technology to market.

Noveto claims its Smart Audio could easily be embedded into a range of consumer electronics such as personal assistants from the likes of Amazon or Google, as well as other devices including smart TV’s, monitors, PC systems, Conference Call solutions or basically any other appliance that generates audio to the user, Noveto also plans to bring the technology to digital signage too.

Noveto Smart Audio uses a proprietary smart algorithm with a sophisticated beamforming technology, face detection, tracking capabilities and a DSP engine to locate the position of users ears and then beams acoustic energy to create “sound bubbles” right next to the ears. When the users head moves, the sounds bubbles dynamically adjust to follow the user. Noveto controls the acoustic waves generated by its device with a dedicated chipset which handles numerous audio channels to create full-range stereo, surround and 3D sound. 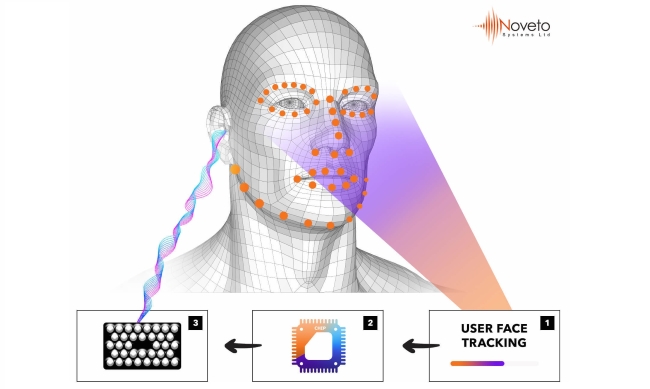 This innovative technology from Noveto allows sound to be steered and focused dynamically. So, users can enjoy listening to audio content in their own space or in public, without using isolating headphones or traditional audio speakers. Noveto claims it’s Smart Audio solution reduces sound pollution by 90%.

“The successful tape out of our first chip is a vote of confidence in our brilliant R&D team and I thank all of them for their everlasting efforts. I wish to take this opportunity to thank our partners from Foxconn for their friendship, dedication and guidance and I am certain that together we will launch a product that will hit the markets with great innovation and having a huge success.” Said Daniel Jammer, the Chairman of Noveto.

KitGuru says: It may be a couple of years until we see this technology implemented into mainstream consumer devices, however, it does sound really interesting and could change the way we enjoy listening to audio content without disturbing others. What do you guys think?