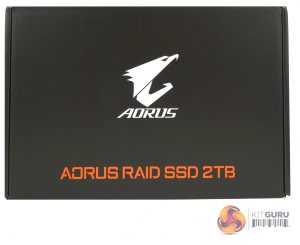 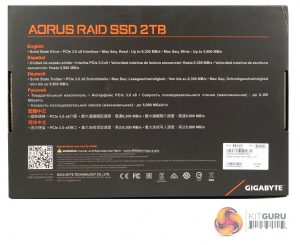 The AORUS RAID SSD 2TB comes in a large box, with just the AORUS logo and product name on the front. The rear of the box has a multi-lingual list of some of the drives features. The drive fits snuggly in the dense foam box lining to prevent it from moving around inside the box.

The AORUS RAID SSD is a single-slot AIC design that makes use of a PCIe 3.0 x8 interface. 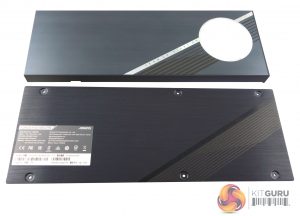 Gigabyte has provided the drive with a serious amount of cooling, in both passive and active forms. The PCB sits on a metallic baseplate, then there are three high thermal conductivity pads, one sits under the M.2 baseplate with another on top, and the final one between the drives and a 5.5mm high-density heatsink.

Finally, there is the Armor outer shell. The main cooling is provided by a 5cm blower fan sitting at the far end of the PCB which can be set in one of three modes (silent, balanced and performance). Keeping an eye on the drive’s internal temperatures are nine sensors; 2 per SSD and one for the Marvell Intelligent NVMe Switch.

To access the internals of the drive you have to undo the six screws in the baseplate, and once removed there are four more in the back of the PCB. The drive’s components are well laid out with the four M.2 slots front and centre.  These are filled by four Gigabyte 512GB NVMe drives each using a combination of 3D TLC NAND and a Phison E12 controller. Next comes the Marvell 88NR2241 Intelligent NVMe Switch which sits under its own passive heatsink and finally the 5cm cooling fan.