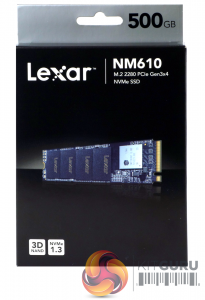 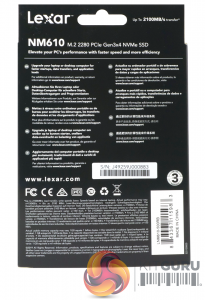 The front of the box has a large clear image of the drive on it along with notes about the fact it uses 3D NAND and supports the NVMe 1.3 specifications. The tab at the top of the box is labelled with the drive’s capacity.

The rear of the box has, at the top right, the maximum rated Sequential read speed (up to 2,100MB/s). Under this are a few lines of multilingual marketing text.

Like the NM600, the NM610 is a single-sided design with all the components housed on one side of the PCB. Making this layout easier to accomplish is the fact that the drive is a DRAM-less design so there is one less chunk of silicon to find a place for. At one end of the PCB, sitting on its own is the Silicon Motion SM2263XT controller while under the product label there are four packages of 64-layer 3D TLC NAND. We tried to prise the label off to see whose NAND the drive is using but whatever was used to attach the label works very well, as it refused to budge without tearing. 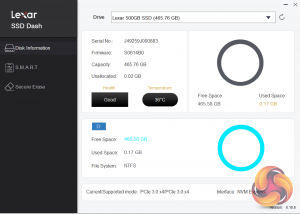 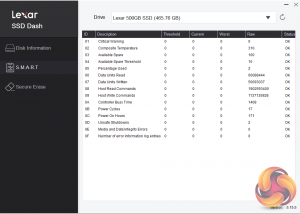 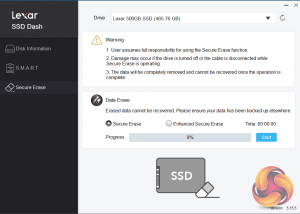 Lexar’s SSD utility goes under the name of SSD Dash. It’s not as fully featured as some of its competitor’s from, for example, Samsung or WD, but it does offer all the basic information you might need to keep an eye on your drive in an easy to understand way. It also supports Secure Erase.