To test battery life we used the ‘Home’ benchmark in PCMark 8. This test isn’t hugely demanding when it comes to computational requirements and, although artificial, it is likely to simulate the sort of stress the laptop would undergo while doing a small amount of video editing, web browsing and word processing. We set the screen brightness to 100%, and the keyboard brightness to 100%. In the Razer synapse software the performance mode was also set to gaming so the laptop was running at full processing speed. 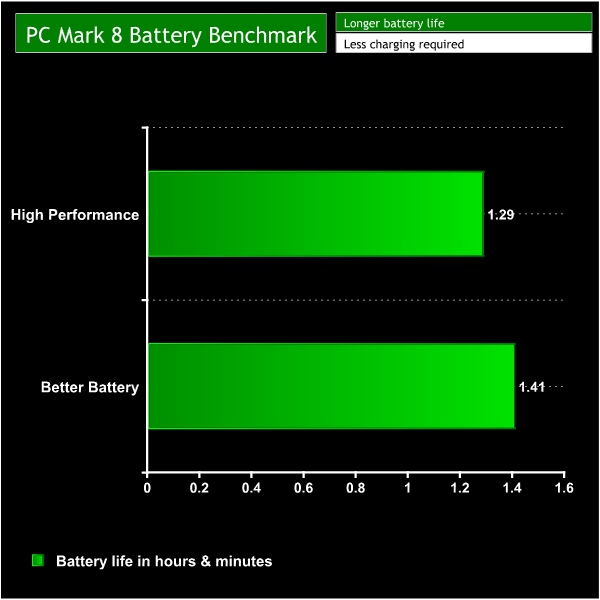 The PC Mark 8 benchmark shows that the Razer Blade 15 Base’s 65Wh battery lasted around an hour and a half on both power modes we tested. This is an artificial benchmark so you could expect to double this time in a real world situation. However, 3 hours is pretty poor and even if you turned off the keyboard LEDs and really dimmed down the screen we would still only expect about 4/5 hours – maximum – of use.

Gaming laptops generally seem to be lasting longer and longer, but unfortunately it seems this laptop is lacking compared to its competitors when it comes to battery life. For example the more expensive Razer Blade 15 Advanced model with its 80Wh battery can last longer – so we are seeing a direct impact of the decision to include a 2.5in HDD, as the battery has been made smaller as a result.

We tested the temperatures with the laptop set to ‘best performance’ mode with the charger plugged in. We run AIDA 64 for 10 minutes to stress the CPU & GPU simultaneously. 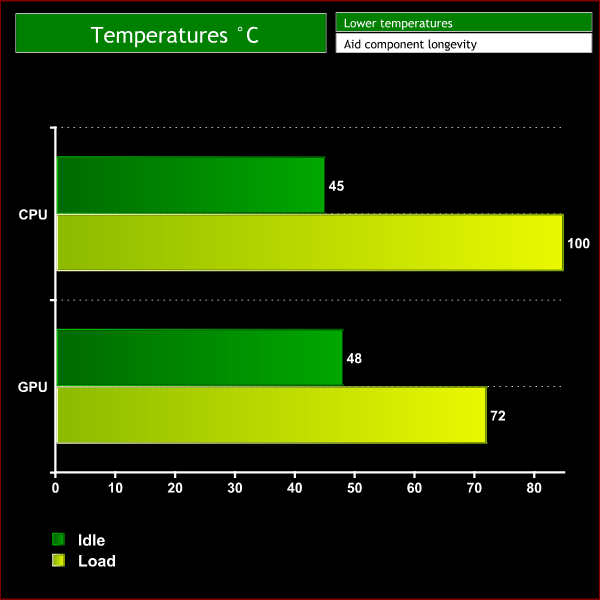 Under idle conditions the i7-8750H easily reaches a maximum all-core speed of 3.9GHz while sitting at a reasonable temperature of 45C. However, during stress testing we saw the CPU peak at no less than 100C. This is obviously a very hot result, but bear in mind the boost behaviour of the i7-8750H – it only hit this temperature for the first few seconds of the test before the clock speed was reduced to a level which the system could maintain, so the 100C temperature is not sustained at all.

With that said, the clock speed dropped down to 2.5GHz/2.6Ghz and the temperature to 79C for the majority of the test. In comparison to the advanced version of the Razer Blade 15 this is a very similar result, as that laptop could maintain 2.4/2.5GHz under load. Both these models compare poorly to other laptops with the i7-8750H –  the more affordable PCSpecialist Fusion II sits at 2.8GHz under load, and some other competitors like the Aero 15X can sit at 3.1GHz and above.

Meanwhile, the GPU temperatures are much better. The GTX 1060 in it’s MAX Q form runs relatively cool and remained at a reasonable 48C while the laptop idled, and it only maxed out at 72C under load during our performance testing – so absolutely nothing to be concerned about. As mentioned, that was with the core clock hovering around 1600MHz, too, which only makes the result look even more impressive.

We measured noise levels using a sound meter while the laptop was idle with no programs open, and then during stress testing to get a reading with the system under 100% load. 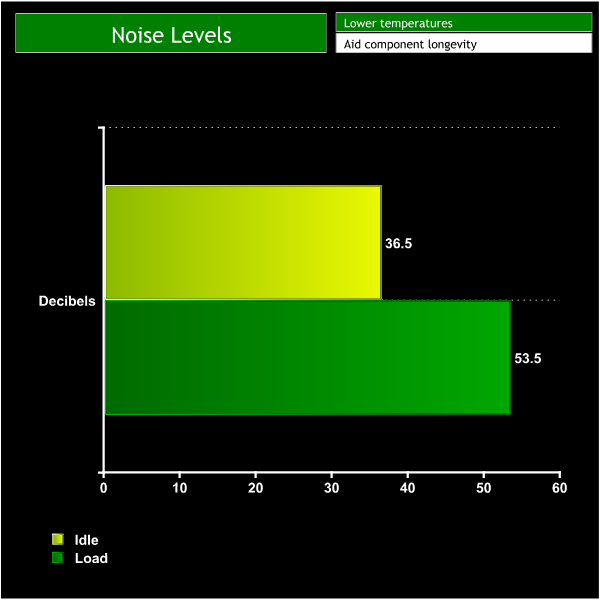 When idle the Razer Blade 15 Base doesn’t make much noise at all. A reading of 36.5 decibels means that you can only really notice the fans when deliberately listening out for them. Under load the fans do definitely get a lot louder. It’s not unbearable and headphone users are unlikely to notice while gaming, but anyone in the area around you is likely to get a little annoyed.

We also noticed that the fans do begin to spin up reasonably easily when doing anything more demanding than just sitting on the desktop. Putting the laptop into the ‘Balanced’ performance mode does make the fan profile a lot less aggressive though, at the cost of a slight decrease in performance.

Previous Fallout 76 will get more detailed patch notes and unrestricted PvP mode in 2019
Next Asus ROG Ryujin 360 Review – an AIO with an OLED screen?