Hearthstone has finally arrived for smartphones

After months of waiting and long after the game's release on tablets and PC, Hearthstone is finally available for smartphones. Blizzard's addictive card game opened up to Android and iOS smartphones last night, with a redesigned user interface to scale perfectly with screens of all sizes.

The free to play card game debuted on the PC back in 2013, since then, millions of players have dug in, buying card packs, completing arena runs and building experimental decks. The game currently has one big card expansion available, focusing on Goblins and Gnomes, along with two adventure modes, titled: ‘The Curse of Naxxramus' and ‘Blackrock Mountain'. 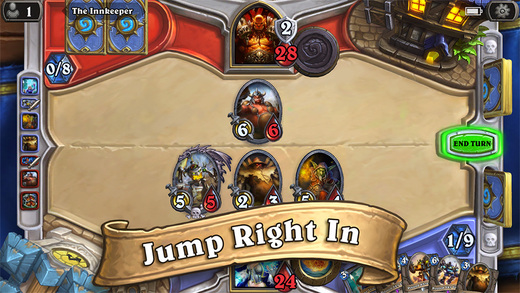 Since Hearthstone is tied to your Blizzard account, your progress, card collection and saved decks carry over between devices. Once you complete a game on a smartphone, you will get one free card pack from the classic collection.

There are some notable differences for the phone version, the main menu has been rearranged to make using smaller screens easier. Additionally, once in a game, the cards in your hand are pushed off to the side of the screen, you then tap on your hand to bring it up for a closer look and to play cards.

You can find Hearthstone in the Google Play Store as well as the iOS App Store.

KitGuru Says: I currently use an iPhone 5S and I found the new user interface to work extremely well on such a small screen. Blizzard has done a great job of ensuring you get the full experience on a range of devices, regardless of screen size. Do any of you guys still play Hearthstone? I imagine bringing it to smartphones will attract more players.