Superdata's worldwide digital games market report for September has released, and with it some new games on the top-grossing titles. But there was something unexpected: Fortnite had its worst month since November 2017.

Just before the epic finale of Fortnite's season 10, and the release of “Chapter 2”, Fortnite had its “worst performing month of revenue since November 2017”, reported SuperData. It's estimated that the month-over-month revenue, across all platforms, dropped by 43% in September of 2019. This decrease comes after the report for August, where Fortnite was the top-grossing title on console.

NBA 2K20, FIFA 20 are 2 of the new additions to the list, but with mixed results. NBA2K franchise grew 6%, and the FIFA franchise year-over-year revenue decreased slightly. Comparing to last September, both franchises combined had increased by 24%.

On the other hand, Borderlands 3, another new title for the list, sold around 3.3 million digital units on both PC and consoles in the past month. Fate/Grand Order had a good month too, nearly doubling the game's revenue to $246 million, in comparison with $131 million from the previous month and the $98 million in the last September. 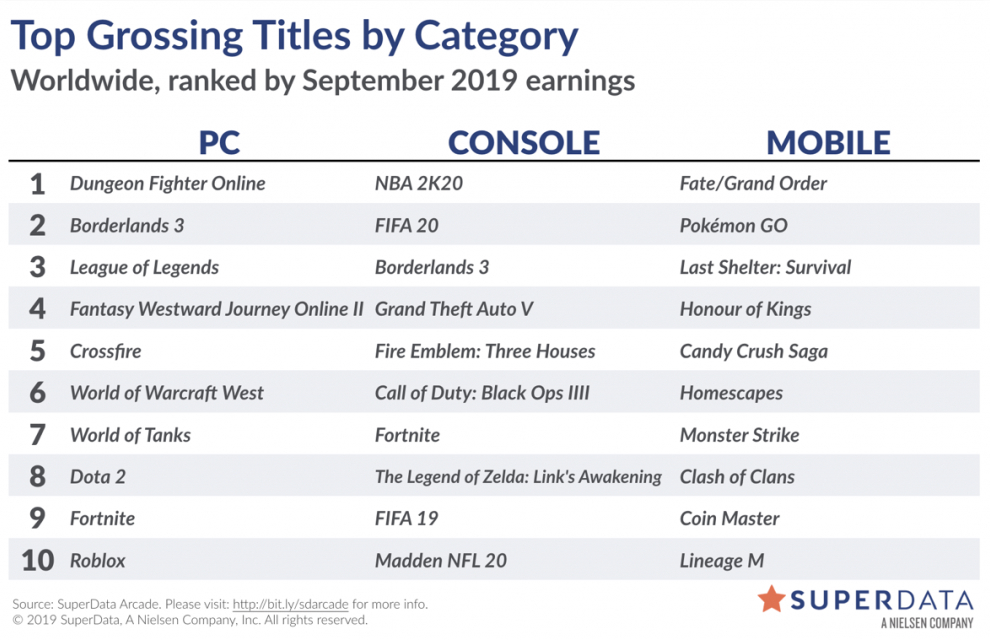 All things considered, according to SuperData's research, global digital spending decreased 1% to $8.9 billion compared to the previous month. Console spend declined 17% year-over-year, while PC only dropped 3%. On the opposite side, mobile increased 6% year-over-year, growing the total market share to 59%.

KitGuru says: Fortnite's drop may well be a fluke, but only time will tell. Looks like the “Chapter 2” Update came just in time to relaunch the game.