Nintendo’s E3 this year is going to be big, or at least, it needs to be. While the 3DS is still going pretty strong, its market is being eaten alive by the mobile gaming segment and that’s only going to get worse as the power of the devices improve year on year, easily outstripping the irregular updates of the Nintendo handheld. In the home arena, the Wii U is doing far worse, with barely any units sold (compared to its contemporaries) and a lack of any real system selling games. Nintendo needs to make a splash this year. Which is why this list of (potential) playable games needs to tick the boxes for every attending Nintendo fan. 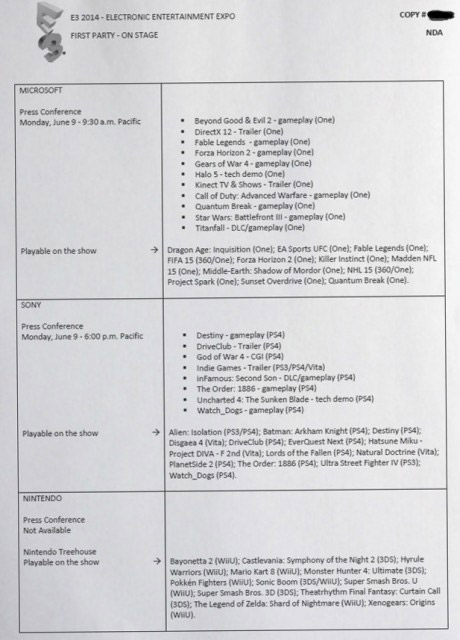 Released alongside the Sony and Microsoft playable games, Nintendo’s list is somewhat odd looking, since its Press Conference titles aren’t listed like the other major console makers. However, we do have the playable list, which reads as follows:

As pointed out by WiiUDaily, some of those games seem suspect straight off the bat. Firstly there’s the inclusion of Mario Kart 8, which is an odd choice since the game will have been released by that point. There’s also no mention there of the new IPs Nintendo has likely got planned for the conference, though that of course could just mean that it’s going to be announced rather than playable. Similarly there’s no mention there of a new Metroid, but again, we could just be looking at an announcement.

This sort of trend of released games being playable is also present in the Xbox One and PS4 playable game lists, with titles like Killer Instinct and Watch Dogs appearing in the document.

KitGuru Says: Lots of exciting titles list there and some are bound to be playable on the day, even if this list turns out to be false. Which ones are you most excited for? And Nintendo fans, does the list of games tick all the boxes for you?