KitGuru Games: Could Amazon’s ‘New World’ be the next big MMO?

Amazon Game Studios’ ‘New World’ has been in development for many years now, with the first mentions of the MMO appearing in 2014. The game has been delayed time and time again, but here we are in July 2021, with the closed beta live and the official launch just on the horizon. In this week’s KitGuru Games, we go over what has changed since the early alpha days and try to answer the biggest question of all – is this MMO worth playing now?

New World began life as a survival game, like Rust, Reign of Kings and other early survival hits. The idea was to put a bunch of players on a map, have them spread out to gather resources and build bases and then raid each other in intense PvP battles. Over time, the development team transitioned to a more traditional MMORPG format, although there are remnants of the game’s survival roots still in place. 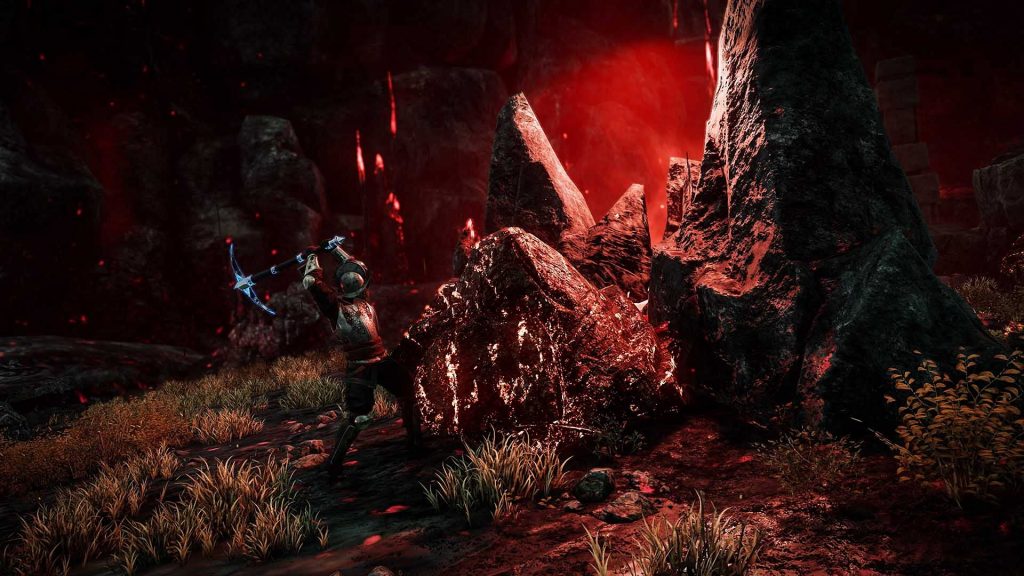 While there are no food and water meters to keep an eye on, the game does still retain a crafting and gathering system that feels like it came straight out of Rust or Ark. Early in the game, you’ll be sent on a series of quests to gather rock, wood, and other materials, which you can then use to make tools to perform these tasks faster. There is also a hunting and cooking system, as well as a camping system, so you can set up a small campsite out in the open world, but unfortunately, you won’t be able to build a full-on base, as you could in early alpha versions of the game.

Given New World’s early days as a survival game, I had some concerns going in that this MMO would be a sandbox, where players need to ‘find their own fun’. Fortunately, this is not the case, in fact based on my early gameplay, I’d say this is one of the easier MMOs to jump into as a solo player. You start off with a nice linear tutorial to get to grips with movement and combat. After that, the world starts to open up and you learn about crafting, resource gathering, inventory management etc. All of this information is given to the player at a steady pace, so you never feel overwhelmed, or like you need to search for additional help outside of the game.

Speaking of combat, this is an area where the game sets itself apart. New World uses an action combat system, with weighty, deliberate weapon swings and movements that feel reminiscent of the Souls games. However, you are limited to just three abilities per weapon, so with a maximum of two weapons equipped at one time, you’ll have access to six abilities. Those used to World of Warcraft or The Elder Scrolls Online may find this limiting, but for me, I found it refreshing to not be staring at a long hot bar and pressing number keys constantly. Combat in New World requires a bit more positional awareness and good timing for dodge rolls, particularly when trying to take on a few enemies at once. My only gripe is that there isn’t a parry function for all melee weapons, which would make the combat feel more fluid and add an additional layer of timing and engagement. 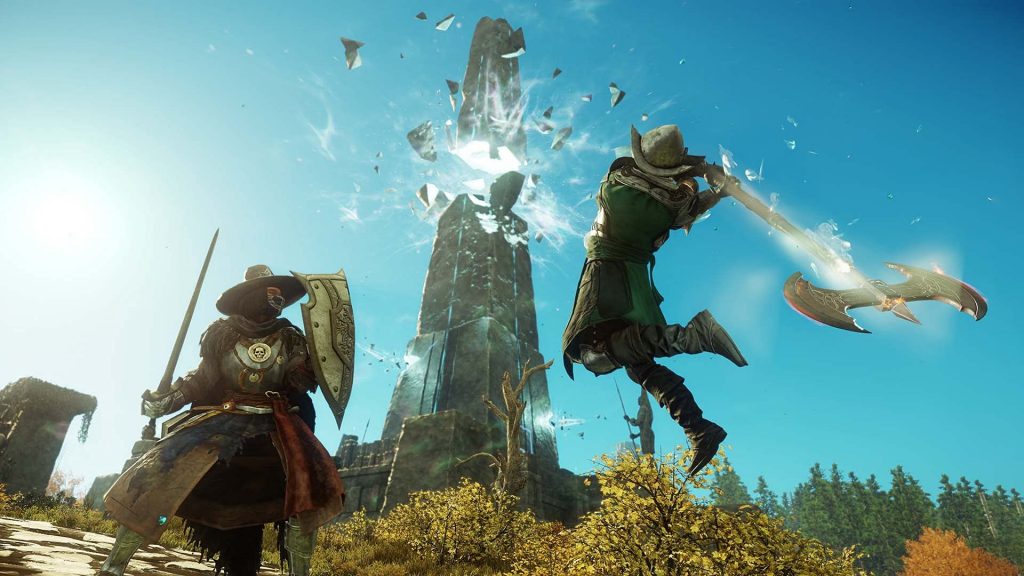 One of the aspects I’ve enjoyed most about New World so far is the freedom you are given.  There are no set classes locking you into a specific playstyle. Instead, you can equip any weapon as soon as you have it, and each weapon type has its own skill tree and levelling system. With that in mind, if you find yourself bored of swinging a sword and shield around, you can just equip a new weapon and start mastering the skills and abilities available in that tree. Similarly to Skyrim, levelling up your weapon skills simply requires you to put time into using them – this also applies to crafting.

In terms of network stability and overall game feel, I had no issues playing for several hours in one sitting and getting into an open slot on a high population server was quick and painless. There was no perceivable latency while questing and I did not encounter any disconnect issues or crashes using a PC with an Intel Core i7-8700K and an Nvidia GTX 1080 Ti – do be warned though, there are reports of some newer GPU owners facing severe issues while playing this game. Specifically, EVGA RTX 3090 owners have reported broken GPUs after playing the game, although the exact root cause is still unclear. Capping the maximum frame rate in your graphics drivers may help avoid any issues.

Using the ‘high’ graphics preset, I was able to maintain over 60 frames per second at all times with just one exception – entering a hub town with a lot of other players in close proximity did bring my frame rate down into the mid-50s. It is likely that in raids and dungeons, I’ll encounter similar dips in frame rate, which is not uncommon for an MMO. 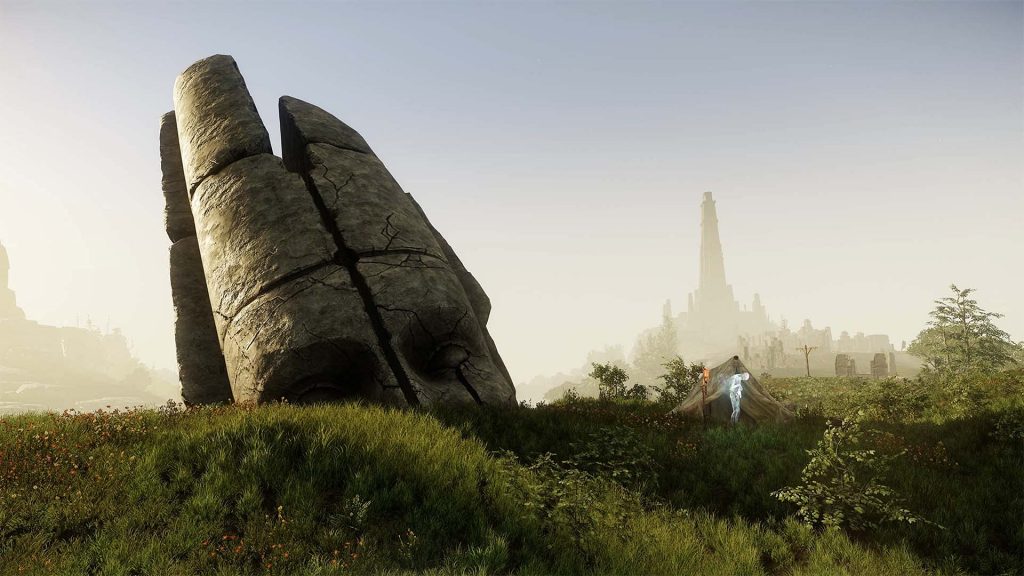 Graphically, the game looks very impressive, particularly in dense forest areas with lots of foliage. However, this is let down by character customisation, as there is only one race to choose from and a relatively small selection of faces and hair styles to go with that. This is something that can be improved over time, but at launch, character creation is relatively slim on options, so your customisation options are going to come in the form of weapons and armour,

Do keep in mind that these are very early impressions, I am just nearing on level 20 and will soon get to start experiencing dungeons, but there is still a long way to go until level 60 and reaching end-game content. So far though, questing and the New Player Experience have been top notch. There is certainly a lot of promise and potential here.

If you’ve been itching to play an MMO recently, then I would recommend trying out New World when it enters open beta in August, just keep in mind that progress will be wiped before the official launch on the 31st of August. Alternatively, pre-ordering the game on Steam now will get to access to the closed beta, which is running until the 2nd of August.

KitGuru Says: My early feeling is that New World could be one of the biggest surprises of the year. Have any of you tried out the closed beta? What do you think of the game so far?