The Steam Summer Sale will be coming to a close shortly, but first, Valve is taking the opportunity to reveal the top selling games on Steam so far in 2018. As we saw in the 2017 bestsellers list, games are broken down into platinum, gold, silver and bronze categories. Perhaps unsurprisingly, Grand Theft Auto V and PUBG still sit in the upper echelon.

While exact sales figures for each game are hidden, these sections are a good indication of what is currently popular on Steam. In the Platinum section, we have the usual suspects like Rocket League, Rainbow Six Siege, CS:GO, Dota 2, GTA V and PUBG. However, some more surprising additions are still hanging out in the top spot, including Kingdom Come Deliverance, Civ VI, Vermintide 2, Far Cry 5 and Warframe. 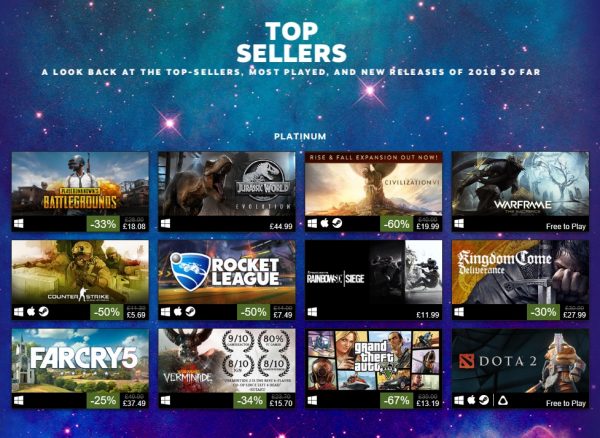 The gold section is perhaps the most interesting. Leading the charge is Dragonball FighterZ, proving that fighting games are still very popular on PC. The Elder Scrolls Online also makes an appearance in this section, showing that Bethesda and Zenimax have been winning people over with its expansions.

The silver section is about what you would expect, featuring Fallout 4, Frost Punk, Dark Souls III, Nier Automata, Dead By Daylight and a few others. The Bronze section is massive too, so it is well worth checking out the full list.

KitGuru Says: Did any of you pick up some new games during the Steam Summer Sale? I must admit, seeing GTA V still being classed as a best seller is surprising, we clearly haven't reached a declining point for that game just yet. It will be very interesting to see how much this list changes at the end of the year.