Right behind Microsoft’s March Games with Gold announcement, Sony has announced which games PlayStation Plus users are set to receive for free in the month of March. Subscribers will be receiving two games this month: Sonic Forces, the latest mainline title in the franchise to use the ‘Boost Formula‘, and Shadow of the Colossus, a complete remake of the PlayStation 2 classic. Both titles will be available to purchase for free from Tuesday the 3rd of March until Monday the 6th of April.

Sonic Forces was first announced during Sonic’s 25th anniversary event. Utilising a new version of Generations’ engine – the Hedgehog Engine 2 – Sonic Forces is split into 3 distinct styles. First, there’s the Boost Formula gameplay. Popularised by Sonic Unleashed and Generations, this style puts you behind Sonic as he constantly moves and pushes forward, boosting all the while. The second style is Classic Sonic, which sees the movement and camera shift to a 2.5D perspective, evoking similarities to Sonic’s original gameplay styles. Lastly, players will create their own original hero and play them in sections which focus on the use of gadgets. Though Sonic Forces saw mixed reviews from both critics and fans, levels are relatively short and gameplay can be satisfying, meaning that the game is definitely at least worth giving a go – especially for the price of ‘free’. 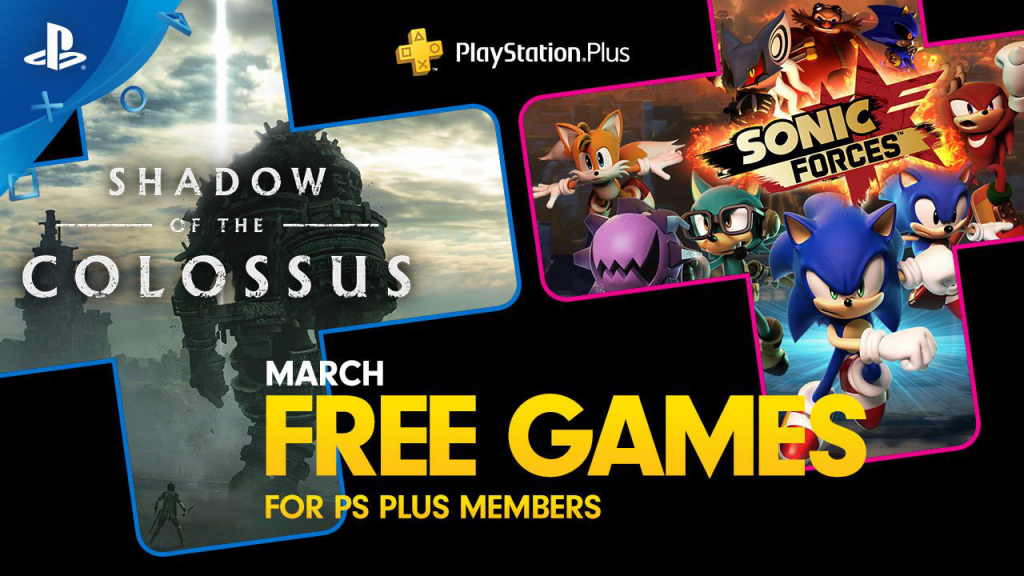 Shadow of the Colossus is a complete from-the-ground-up remake of the classic PlayStation 2 title, in a similar vein to Crash Bandicoot N’ Sane Trilogy or Spyro Reignited Trilogy. Developed by Bluepoint Games, known to be one of the leading remastering studios in the industry, this first-party PlayStation exclusive saw universal acclaim both when it originally released in 2005, and 13 years later when it came to PlayStation 4. Shadow of the Colossus is described as “a breathtaking journey through ancient lands” and can be experienced for free on the 3rd of March.

There’s still time to add February’s free games to your library, which are The Sims 4, The Bioshock Collection, and Firewall: Zero hour. More information on those titles can be found HERE.

KitGuru says: What do you think of this month’s offerings? Did you play Shadow of the Colossus back on the PS2? What’s your favourite Sonic game? Let us know down below.