Microsoft Corp. is expected to showcase its Windows 10 operating system running on various consumer devices – such as smartphones or tablets – later this month, hence, the OS in its current form is ready to run on such gadgets. Apparently, if a publication from a web-site is to be believed, then we can even take a look at a Windows 10-based smartphone.

WindowsPhoneItaly has published two photos of a Nokia Lumia handset that runs a Windows (Phone) operating system with a previously unseen graphics user interface. The web-site claims that the smartphone was running Microsoft’s next-generation Windows 10 OS. The manu language as well as the weather forecast displayed by the device suggests that the images were taken recently in Italy. 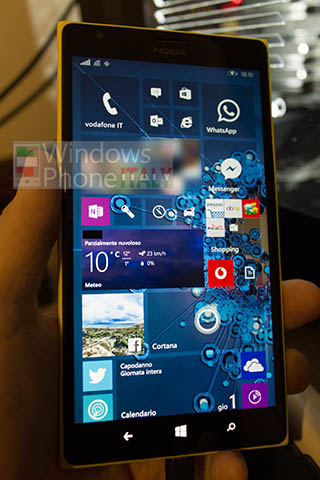 If the images truly display smartphones running Windows 10, we can reveal that the next operating system for handsets from Microsoft will bring iteration will bring support for a full background wallpaper that occupies spaces between tiles. By contrast, currently it is possible for a background to fill only Live Tiles, whereas any spare room on the screen remains black. In addition, the backgrounds now work not only in the Start screen, but also in other places. 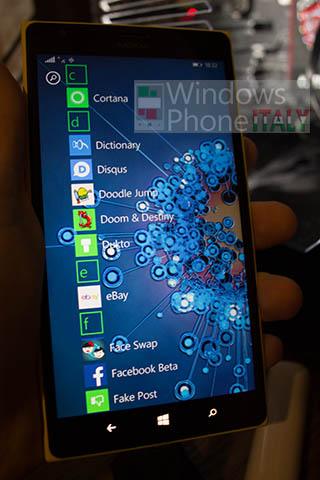 Since Microsoft promised in the past that its Windows 10 will be more customizable than the existing operating systems, improvements like that are possible.

While it is impossible to draw any conclusions about the quality of the operating system based on the Start screen and the way backgrounds work, the main conclusion that can be made here is that Windows 10 can run on ARM-compatible application processors and can run on them now. Therefore, it is highly likely that Microsoft will indeed showcase its Windows 10-powered Lumia smartphones later this month.

KitGuru Says: If Windows 10 can operate on smartphones now, it is logical to expect the software giant to launch the OS on multiple devices later this year. This will clearly be a new approach for a product roll-out: from wearables to smartphones, to PCs, to workstations.